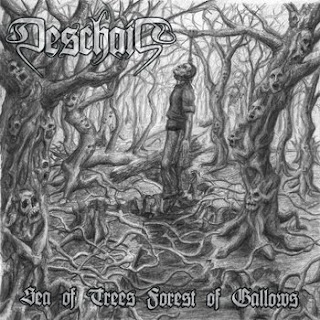 Deschain was a group I stumbled upon earlier this year who's debut album, "Upon The Oaken Throne" was pretty impressive. I received an email a few weeks ago about them releasing this album. I was more than interested in seeing how they had progressed within less than a year after their debut.
Probably one of my main complaints with the group's debut was that it was a bit too long, being over a hour, with most songs topping in at over ten minutes, there were times when it was a bit taxing to get through. On here, the band have elongated their songs further, but made this entire album around thirty-five minute with only two songs. The difference, while some might see it as a negative, is that it is a lot more tolerable as a whole and a bit easier to digest as well. The band has also improved on the technical side of things as well, with the production being a lot clearer and not nearly raw as like the debut was. It's hard to say that a record is consistent sounding, mixing and production wise, when there's only two tracks, but both tracks on here do trump any of the production decisions on the debut, with both songs never dipping in quality or going into a weird place. The drums also don't sound nearly as triggered or clicky as the debut and instead have a much more natural sound to them, which really works well with the tone of the guitars and bass.
As with their debut, the songwriting on here is very strong. The riffs still channel a variety of genres, from black metal to doom, death, and prog, but never sound rehashed or just crammed together. I'd even say that there's an increased influence of traditional heavy metal, ala Iron Maiden or Diamondhead, styled guitar harmonies being used in here as well. Both songs demonstrate an even stronger songwriting ability, in my opinion, than the debut as well as just having catchy riffs in their songs too. Obviously the band have carried over their sense of dynamics, though it has improved, with songs being able to convey various emotional states, from anger to more uplifting, whether or not that was intention I'm not sure. I have to say, guitar solos in black metal are often not the greatest and can sound out of place, but that's not the case with this band. Every solo on here feels like it's in the right place and there's variety in them as well, from the more shredding and show-offy ones to more soulful and emotional with more feel.
Overall, it's a very strong piece of work that definitely has the band at their peak, as of right now. Both songs on here are very well written and it excites me to see where this band goes in another year if they made this great a leap in just about ten months. Definitely check this out if you're at all interested in progressive black metal.
Overall Score: 8.5
Highlights: Forest of Gallows (Cast Down The Sun)
Posted by maskofgojira at 11:25 AM