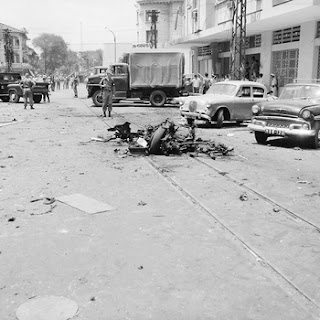 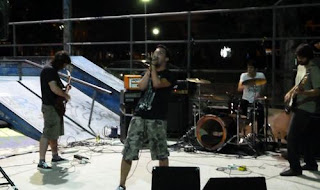 This year has provided some great debut albums from a lot of underground bands, when I came across this one, I was hoping for another. The cover really intrigued me because it doesn't look like your typical black metal album cover. I just can't ignore something that peaks my interest.
There's something to be said for making something interesting musically, whether you know you're actually doing it or not. When I listened to this album, there's an almost naive charm to it because there are points on here where you can tell what the band was going for in a certain part, but they wind up making something that's well beyond that. There are moments where it's obvious that these guys were going for a more traditional sort of black metal, tremolo picked section, but it winds up sounding more abstract and interesting, kind of in the same vicinity of something you might hear from a band like Krallice or Liturgy. There are also those breaks where it sounds like the band are attempting to go into a more grinding section, but those parts actually interrupt the flow of the black metal ones which gives the entire song the feeling as if it could all just fall apart at any moment, which I enjoyed.
I think it's interesting that while these guys do have that black metal and that grindcore part of their sound, this album is nowhere near as distorted as a lot of other bands. Each riff is pretty clear and dry sounding, it's not a full and rounded tone, but it works. The production is also pretty raw as well, giving the band a bit more of a live feel during these songs. It's an authentic feeling record, it sounds like the band knew these songs are were really rehearsed when they're were playing them. Sections are well paced and flow together nicely, through the more traditional paced In Bright Colours that moves into a pretty melodic bridge before closing with a more Krallice-esque tremolo pattern. Other more experimental sections are used in the album as well, with a more dissonant harmony section moving into a sludge passage on Space of Exile or the spoken word used on Joy In Fear being of note.
I really enjoyed the album and it really shows a young band with potential. These guys are definitely doing something a little different from the rest of the black metal pack, and it's actually good. I hope that you check this band out if you're into more experimental black metal groups.
Overall Score: 8
Highlights: Volatile & Senile, Space of Exile, Now Exploding In Saigon
Posted by maskofgojira at 10:46 AM