Pyramids/Horseback - A Throne Without A King (2011) 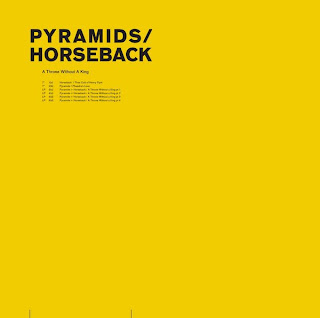 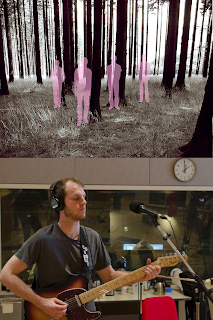 If you've been paying attention to new and exciting metal groups within the last four or five years now, you'll know about both Pyramids and Horseback. This collaboration has been highly anticipated and has obviously been worked on for a long time. As a prelude, I have to say that if you're expecting anything like either band, you might be disappointed by this.
Like everyone else, the best place to start with this release would have to be the 7' EP that accompanies the collaboration. The two tracks on here feature a new song from both projects. Starting with Pyramids, you get a very original take on the whole post-black metal/blackgaze idea, if you want to call this track metal at all, which is yet another firm step into more original territory for the band to be honest. What you get here is essentially an extended idea from their self-titled debut which combines post-rock, shoegaze, ambient, and very subtle traces of black metal together. While the thudding drums that move in and out of the song prove to be the only real semblance of a metal sound, the track is by far the most creative, non-collaborative, thing the band has released thus far. Horseback brings a much more metal song from his end. Recalling a sound not to dissimilar than the one exhibited on the "Forbidden Planet" album, as such, it's a black metal song. What you get however is a more "accessible" take from his end of black metal, as the drums pound along in a groove, which isn't something you'll hear all that often within black metal underneath melodies that are surprisingly focus more on melody than atmosphere. Then it all stops and descends into a hazy cloud of chaos that somewhat prepares you for what is to come after the track concludes.
The collaborative effort from the two is a much different affair than I think anyone would have expected. This is not experimental metal, post-rock, shoegaze, whatever music, what you'll find within this collaborative track, or tracks since it's divided into four parts, is a sound based in noise and drones. Amongst the droning feedback you do get hit with waves that do recall elements of both groups, whether it be a more intense noise that comes from the harsher side of Horseback or a more cascading ambiance from the likes of Pyramids, as well as others. I mean, perhaps there's a bit more of an inclination towards Pyramids' sound than Horseback within this collaboration, but to be honest, that's really more of a subjective thing. Within the four tracks you do get a very jittery and unstable sense that the track is just barely being held together as it jumps frantically at times from noise to ambiance to field recordings and back again. In all honesty, I felt like the greater majority of this was kind of just treading into territory that I just find to be a bit too pretentious and at times like the song was just running in circles around itself, recycling ideas that I wasn't all that impressed with. I'm not opposed to noise music, I'm not opposed to dark ambient or drone music, I'm not opposed to experimental avant-garde music, but the great majority of this collaboration just left me feeling quite bored and at times, annoyed, and that was really disappointing. For arguements sake, I will say that it does get easier and more enjoyeable with each listen, but the ideas present don't do anything for me unless they're it's background music.
At the end of the day I really feel like what I, personally, got out of this release was two very well executed tracks and a bunch of ideas that didn't do anything for me. While I can certainly respect the ideas present in the collaboration, the majority of it did nothing for me. Check it out if you're a fan, the two individual tracks are definitely worth it, but proceed with caution into the collaboration.
Overall Score: 8
Highlights: Phaedra's Love, Thee Cult of Henry Flynt
Posted by maskofgojira at 12:03 PM