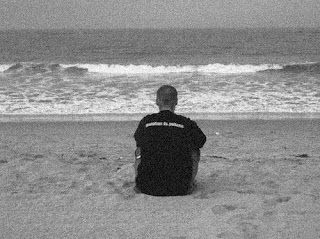 First impressions can often be wrong. That phrase has been said before and has rung true many, many times before and it has proved me wrong again. I was aware of this album when it was first released on the internet but ignored it and until I was sent an email about it, I was most likely never going to listen to it.
Last year Lamentations of The Ashen's sole member Bon Vincent Fry released his full-length debut, "In The Burden of The Heart’s Plaint” and I was not really a big fan of it. What you had within that record was fairly typical depressive and ambient black metal along the lines of Xasthur and other acts of a similar nature. When it came to the depressive black metal genre, it just didn't do anything for me, though there were some decent spots on it. By comparison, Bon has really stepped up his game for this sophomore album because things have really changed. No longer could this project be seen as just another depressive act, and as much as some might dislike progress from a project coming from this scene, it is for the better.
On this album, you essentially have four "real" tracks, three if you count the intro as a song, and then an outro. Those three tracks in the middle are long and epic pieces of blackened doom metal, drone, and blackgaze. The quality of each of these tracks far exceeds anything that was on the last album, and while I did find the first of the three, Eventide Sentinels Bedecked With Ineffable Twilight, to be rather too long winded, it's the shortest of the three and proves to be the least entertaining. Veiled In Clairaudient Litany, the longest on here which manages to top twenty minutes, is actually the best song on here. Throughout it's elongated course, you get an exceptional piece of blackgaze/post-black metal that shifts between blackened post-rock melodies to full-blown post-rock calm sections with acoustic guitars and stark ambiances. While it's nothing new for the genre, it is, essentially, everything that sub-sub-genre has come to be known for and it's done very well and manages to keep things interesting throughout the entire piece. Then there's Viperine Shades Linger Quiescent Among Erstwhile Passions, which is the most aggressive track on the entire album, while still dwelling within the whole blackgaze kind of sound, it's a more obvious attempt at writing a more aggressive sounding black metal track. There are clear moments that do bring more of that post-rock element back into the forefront of the song, but they were natural and didn't actually feel forced in or fake. The closer then brings back the piano from the intro and precedes to finish the album in an ambient fashion. All in all, it's a solid piece of work.
Overall, it's a major step up in my opinion from the debut and is much more appealing. While these songs do prove to be a bit too longer, most of them do provide ideas that justify their lengths enough to say they're not major faults in the album. Check it out if you want to hear a better take on depressive blackened doomgaze metal whatever genres.
Overall Score: 7.5
Highlights: Veiled In Clairaudient Litany, Viperine Shades Linger Quiescent Among Erstwhile Passions
Posted by maskofgojira at 8:36 AM