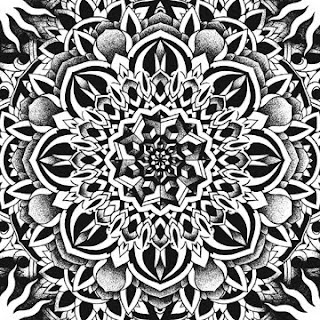 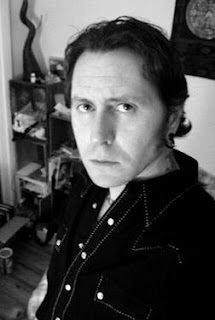 Earlier this year, a couple of months ago in fact, I received and reviewed Sky Burial's last album, "Threnody For Collapsing Suns," an album which I enjoyed. It was my first experience with the project and it encouraged me to look into the other releases. This album was one that I was very excited to hear once I first read it's descriptions.
What made me anticipate this album so much and what makes it different from previous work Michael Page has done in the past with this project is that this album is a collaboration between himself and Hawkwind saxophonist Nik Turner. Now, I don't know if I've said this in the past or not but I am a big fan of the saxophone, it's one of my favorite instruments and the idea of mixing it with a project like Page's just got me extremely excited. Page's work with the project just seemed like an absolutely perfect idea to make use of a saxophone. The ambient and drone soundscapes he creates just lend themselves to having something kind of lead on top of it, no disrespect to Page meant in any way, but I could just imagine another instrument sort of guiding the listener along through a track instead of kind of wandering haphazardly throughout the different worlds created by Page. Having said that, I do feel as though Turner could have adjusted his sound to fit the soundscapes that Page crafted a bit more, if only to allow for a more cohesive sound.
The two songs on here are simply great though. You get an extended forty minute opener and a sixteen minute closer, and that's it. Ambient music is best set to a description since describing ambient music, in all honesty, can seem a bit trite and repetitive since I don't really know what I'm doing when it comes to that genre, so when I listened to this album, I was able to envision the ocean. The soundscapes are the water, the life that swims around in front of you as you just sort of drift along, because you would obviously be underwater to be seeing this, and the subtle noises and drones are the currents pulling you along, the darkness that lies below you if you sink. The saxophone actually made me start to picture the violence of fish eating each other, or the harshness and brutality of the ocean. The second track really reflects that darker portion of the sea, portraying a very huge and cavernous soundscape as an even greater darkness that just goes on and on forever, you are looking into the void, and it is looking back at you. But within that, as you fade away into the darkness, there is beauty, found within the closing minutes of the track you see light from above overtaking the darkness you were consumed by. You can make your own assumptions about what's happens next, what that means to you, and what these sounds portray for you, but in the end, this is what I saw, and it was one damn good journey.
Overall, fantastic, this is the sort of stuff I absolutely love, and it's done superbly on here. I would love to hear more music like this if I didn't think my tolerance for it would decline if I did so. Definitely listen to this if you like experimental music in any way, this comes highly recommended.
Overall Score: 9.5
Highlights: Both Tracks Are Highlights
Posted by maskofgojira at 10:58 AM