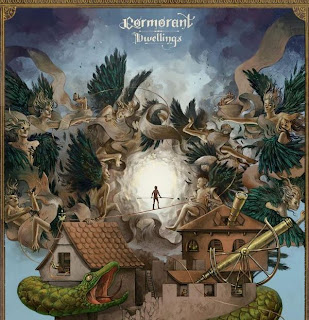 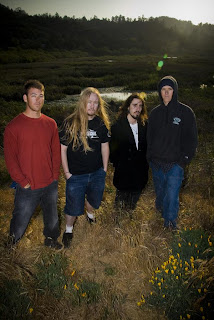 What might be odd is that I found out, originally, about Cormorant back when their first album "Metazoa" was coming out. The odd part is in that I found them whilst looking up melodic death metal bands. I remember really being into that album when it came out, I can't say I've given it a whole lot of time since starting this blog though (I could say that about a lot of albums though).
The important thing to know about this record, and band really, is that despite having plenty of death and black metal influences, I'd put them more into the league of progressive metal than either of the other genres. The reason I think this is mainly due to the fact that if you remove the vocals, a lot of the riffing falls into much more technical realm of play. A lot of these songs are extremely proggy and would definitely not play well to a fan of traditional extreme metal. Ideas are constantly being shifted and changed around within the songs and you'll find that a song never ends where it has begun. Each track is like a small journey of sorts with every riff change taking you somewhere different. Like I said, it's more blackened progressive metal than progressive black metal in my opinion, and with that being said, you have various style melding like death metal, jazz, blues, and folk music, and each transition is pulled off with a high level of musicianship and shows a cautious and meticulous dedication to the craft of songwriting, as a track like A Howling Dust shows with gusto. Every one of these tracks never once feels as long as they actually are, and I know I say that a lot, but if a song manages to cross the ten minute mark, closer Unearthly Dreamings, and not even feel half as long as it actually is, I consider that a major accomplishment because it means that a song is interesting enough to keep my attention, in this case, without losing it.
Having said all that, I can't say that this album got me as worked up as it's done to a lot of other people. I've read a couple of reviews for this album which have given it perfect scores, and that's all well and good, someone else's opinion, but this just never struck me in my various listenings to it as a total mind blowing album. It's certainly very good and performed impeccably, I can't take that away from the band, but I just didn't find it to reach as high a level as I kind of expected it to. I know that this might surprise some people because this stuff is essentially my bread and butter when it comes to metal, I usually love this sort of stuff. In my opinion, the production is a little too bright for me, when it comes to any band playing some sort of black metal, I tend to like them not to have a brighter sounding production, but that's just a personal qualm that I doubt will have any bearing on someone else's view of the album.
It honestly wasn't surprising that this album was good, I knew that it would be, and I actually got more out of it than I thought I would. I'm probably in the minority in thinking that this album isn't perfect, but it is still very very good. It's a nice piece of work that will not disappoint fans of more progressive forms of extreme metal. Check it out if you don't mind that.
Overall Score: 9
Highlights: Funambulist, A Howling Dust, Unearthly Dreamings
Posted by maskofgojira at 10:52 AM