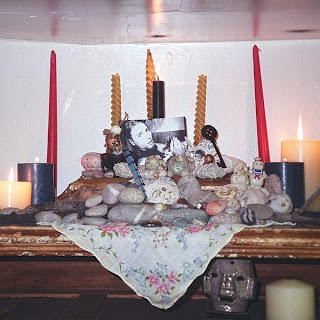 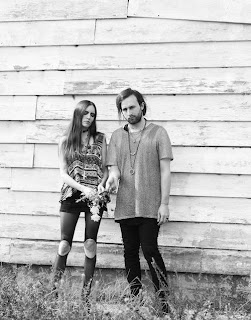 When I look back at 2011, I can honestly say that I haven't covered as vast a variety of music as I would have liked. Last year I managed to cover quite a few electronic albums, this year, I don't think I've covered any. While me doing this won't really make up for me not covering any of it this year, here's me covering something I thought I never would.
I can honestly say that this release is what got me into witch house, though whether or not I'm a huge fan of the genre or not remains to be seen. But onto the release itself, what you in here are two songs, a Neil Young cover, Hey Hey, My My, and Felt U, a song by the duo. I can honestly say that I'm not a Neil Young fan, never have been, but I think that what this duo manage to do with the song is turn it from, what I consider to be, a more uplifting song into something much more introspective and haunting as well as morose, but that's probably expected. The band's own track demonstrates a more ambient kind of idea, while still making use of house beats and synthesizer sounds. I think I do prefer the original to the cover on here, but I can't say that either disappointed me in the least. Yet another win for Handmade Birds, and this was probably the release I was most worried about.
Like I said above, this release did turn me onto witch house, a genre I thought I would get nothing out of after some rather bad experiences with it. I definitely have to check out the duo's previous material after hearing this. Definitely pick it up if you're interested in more introspective electronic music.
Overall Score: 8
Highlights: Felt U
Posted by maskofgojira at 9:55 AM