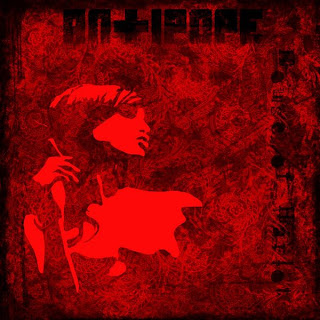 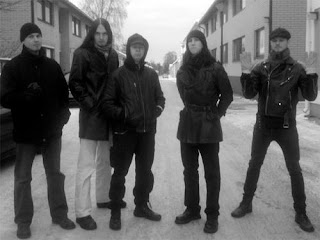 Last year Antipope released their second album "Desert" and I totally missed the chance to cover it. It was one of many records that I had intended to cover last year but ran out of time to do so, so here's me redeeming myself, sort of. This is the band's third full-length, which is following up their last one, which followed an album in 2006.
If there's anything I can be certain of in this review it's that if you like traditional black metal, you will not like this album. This is an album, and a band, that take a lot of chances in their music. Beyond their black metal background, a lot of what's on here is far removed from that style, and in it's place you find a strange electronic sort of gothic kind of album. In all honesty I never got around to listening to last year's "Desert" just because I had other things to do, so I can't really say that this album too dissimilar from that, but this is much different than what I anticipated from it. Now while I did say it was a gothic album, I feel that it would be unfair of me to not say that it isn't nearly as bad or cheesy as a lot of records that come from that genre. You'll find elements of thrash, black, and traditional heavy metal on here used along side the gothic and electronic sounds. So in regards to it being lame solely based on that it's a gothic metal album, totally disregard that argument all together.
The songwriting on here is pretty decent, it unfortunately does carry with it some of the gothic tendencies that lead to certain tracks just not working, The World Coming Down is just terrible in my opinion and it doesn't work. The band are at their best when they are being more aggressive because their melodic side always carries through a track. The heavier the track, the better it turns out being, in my opinion, as the softer tracks on here just sound so contrived and lifeless. A track like To A Passer-By In Black sound so dull and uninspired next to tracks like Waratah which showcase the band's heavier side, but also are much better written songs. That leads me to what is probably my biggest complaint about this album, the songwriting is just spotty, some tracks are good, some are alright, and others are just bad. Closer Happiness In Crime is probably the closest thing you'll get to the entire album being summed up in a single track, which actually puts the album in a good light because the track is well written and constructed, with nice dynamics through it's soft acoustic opening, heavy metal chorus, and psychedelic middle and closing sections.
It's alright, but I guessed I had just hoped for more from this album. I figure that while this may not really be my sort of album, there will be others who will enjoy it's sound a lot more. Definitely look this album up if you want to hear some experimental gothic metal.
Overall Score: 7
Highlights: Communion, Morning Star, Waratah
Posted by maskofgojira at 10:06 AM