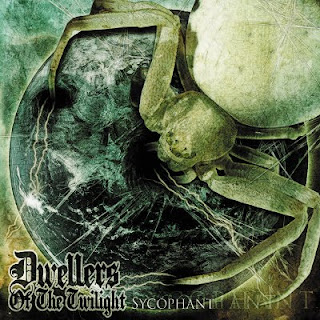 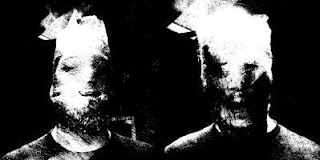 Dwellers of The Twilight is one of those projects that really expanded what I thought of black metal a couple of years ago. At the time when I heard "Gray," I had never heard something as raw and mechanical before. What else would you expect from two freaks with bags over their heads?
As far as I know, this album has been finished for quite some time now and is only being released because the duo couldn't find a label to release it, if I'm wrong please correct me. Besides that, musically you find the duo expanding the sound demonstrated on their debut. While their debut was coined as being "atmospheric", it was a very claustrophobic album to listen to because it retained an intensity that usually isn't found within that sub-genre. This album by comparison is more open atmospherically, not by much, but enough to give you as a listener some breathing room. The duo have also brought in a bit more of a thrash element, hear Dark Matter Lungs, into their sound, especially in the drum-programming, which does give the album as a whole a bit more diversity between the blasting sections.
I'll be straightforward and say that this is a better album than the debut. First of all, the songs are just a lot more memorable and catchy, to an extent easier to digest, but not by much. Tracks like Explorers and Self Conspiracy just stick out with just ripping riffing that's creative while remaining very traditional to black metal tremolo picking. Like I said above, songs are less compact and dense sounding and have a bit more room, which can also be said about the song's lengths. While not by much, the songs on here are a bit longer, with several being over five minutes, which is long for a band who's debut featured songs that rarely even topped four minutes. Along with that, I feel that the band have also become more comfortable embracing different tempos, because the debut was more along the fast side, where as this is much more varied in speeds. All of these things add up to a much more enjoyable album, for myself, and led me to listening to the album quite a few times in a row. I know that in the grand scheme of things, some of the ideas on here aren't original or unique, but I feel that these guys do an impressive job at keeping a very blackened core in tact while toying around with other ideas.
I was very impressed by this album and I like how the duo have grown and progressed. This album was certainly worth the wait and I can only hope that a label decides to pick them up because this is very solid. Definitely look into it if you want to hear a band experiment with various ideas while retaining a black metal core.
Overall Score: 8
Highlights: Skeptics, Fastwalkers, Terraformer
Posted by maskofgojira at 10:46 AM