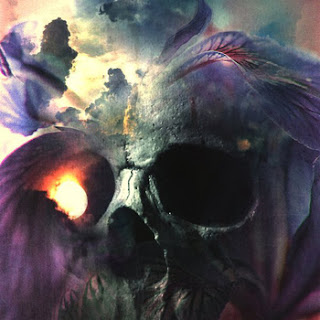 For a band to release a single song as their first release can honestly be a bit frustrating. If the song is good, you always want more, while if it's bad, you really have nothing else to compare it to in terms of quality. That's what you have with this debut release, one song.
So, to start off, this is a twenty minute track, so you are in for a long ride. After an introductory violin passage, we get the real meat and potatoes of this track. I have to be frank and say that the vocals on here are just atrocious, they are honestly terrible. You have a very limited range that goes from a decent and low moan to a very high, annoyingly high, screech that sounds like a baby crying, or someone squeezing a cat, it's just terrible. Musically, this band doesn't venture outside of the whole post-black metal/blackgaze box that has been established by groups like Alcest and Lantlôs, only not nearly as creative or interesting as either of them. I'll give it to them that while most of the time these guys are going aggressive, their guitar tone is a lot cleaner than a lot of their piers. I'll even give it to them that their production is a little bit clearer as well. These guys just aren't really doing anything that I haven't heard done before. The violin section returns at the end of the track, which in all honesty, are the two best parts of the track for me.
While this review probably makes this sound atrocious, it isn't really as bad as I probably made it out to be, except the vocals. Musically, it's not all that bad, just pretty average for the style that the band's playing really. If you're a fan of post-black metal/blackgaze groups, check it out but be wary or it.
Overall Score: 4
Highlights: There's Only One Track
Posted by maskofgojira at 9:13 AM