Uncle Touchy - Everything You Ever Wanted to Know About Violence (2011) 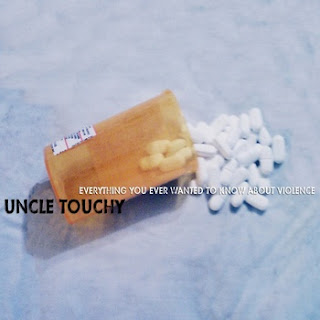 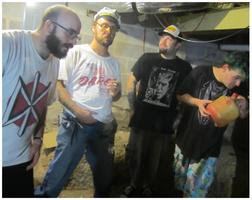 I would like to think that I'm open to noise rock, despite not liking some of the more classic bands, sorry, not a Jesus Lizard fan, the same thing could also be said in the realm of post-hardcore. I was open to this, and I knew once hearing a bit of it that I'd like to cover it, but I can't say that I have a whole lot of noise rock in my musical library. But like I said, had to cover it.
While I'm certainly not the biggest fan of either of the genres mentioned above, I certainly admire the bands that I do find interesting. The bands that do an interesting job and manage to not make me feel like I'm listening to something that's both interesting and intense. Personally, a lot of the bands that I've found I actually like tend to have a bit of a sludge vibe to them, which isn't found on here to be honest, but there's something on that did make me want to listen to it. I mean, there are certainly hints of metal, but nothing on here will particularly stick out as being "metal". This album actually recalls elements that I would normally dislike, Forced Out really reminds me of the little bit of Jesus Lizard that I liked, and it's not done in a contrived way, and thus, really enjoyable.
As much as it might piss some people off, I think it has to be said that there are bands who manage to sound more intense, passionate, and brutal playing noise rock and post-hardcore than metal bands. Personally, I don't think Uncle Touchy reaches that level on very many occasions, but I don't think the point of any of these songs is to achieve an intense moment that rivals metal in any way. I do appreciate the more dissonant style that is usually showcased in both genres, and I particularly love it when the band embrace it into their songs more than for an opening riff or bridge. These guys also embrace a bit more of a blues and southern rock than a lot of the other bands I've heard, another plus for them because I do enjoy more simplistic blues riffing if it's done right in a song, Dimebagged! for instance. I have to be honest, it's usually the vocals that stop me from listening to post-hardcore and it's the music that stops me from listening to noise rock, and you'd think that the melding of them would either make me cringe or really excite me, well I'll tell you it's closer to the ladder. Personally, I still have a problem with some of the vocals on here, I was not a fan of The Courtesy Flush because the vocals were sang in a very annoying and cringe-worthy style, luckily the rest of the album doesn't really use that same style, though I certainly admire his eccentric style.
This record turned into something that was decent into something that I thoroughly enjoyed. I don't think the ideas are all that original, but they're good songs that are just a shot of adrenaline. It's an enjoyable listen for sure and it's definitely worth checking out if you're into more eccentric noise rock and post-hardcore.
Overall Score: 7.5
Highlights: Tiretread On Burst Stomach, Officer Sausage Fingers, Dimebagged!
Posted by maskofgojira at 10:18 AM