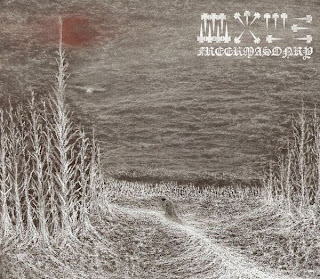 I'll admit that I've never been a huge WOLD fan, if only because my first experience with one of their albums was less than pleasurable. Maybe last year's "Working Together For Our Privacy" was not the best place to start my listening career with WOLD, but what can you do. Two people whose views on music I respect very much have given very conflicting views of this album, so going into it, I wasn't really sure how this one was going to go.
Now, I'll freely admit that I'm probably a bit ignorant when it comes to WOLD, among other groups, so I kind of approached this thing cautiously. Really the only thing I knew this album was gonna be about was that it was nearly rid of all of the band's older black metal influences and was pretty much embracing their noise traits. Like I just mentioned above, I was not particularly a big fan of "Working Together For Our Privacy," so I was aware that the band's exploration of pure noise wasn't one that was all that appealing to me, but I had no idea what I was in for with this album. I have to say that SOL pretty much told me everything I was going to get from the rest of the album, the good and the bad. I'll say right now that I've fallen somewhere between the two people I mentioned above in my perspective of this album.
I guess I'll start by accentuating the positive aspects of this album. First off, the noise, I think that for the most part, it is enjoyable and pretty well done. Each track features a different kind of chaotic distortion backing it, so each track can at least be seen as different entities. The brutal noise of Free Goat of Leviticus is very different from the electronic influence on Working Tools For Praxis, whether or not you want to think of diversity as a positive or not in this case is subjective. I do think that the intention of this was all well and good, but the execution is frustrating because these tracks wind up being very uninteresting, no matter what the difference between them is, it doesn't help if the ideas are just dull. Probably the most irritating thing about this recording though were the vocals. I thought these totally ruined the record for me, they were just terrible. It honestly sounded as if whoever recorded them was sick and was yelling, or screaming, while they had a sore throat, it's just bad. Now, this might seem odd, coming from a guy who advocates repetition to bring about a meditation state from the music, but there's a difference between repeating an idea and making it hypnotizing, and repeating an idea until it's utterly dead and in the ground, or in other words, boring. A lot of what's on here is just boring and dull as all hell.
I don't know, I think I got pretty much what I expect to get out of this, not very much. I'm disappointed mainly because this came out on Profound Lore, a label that has a pretty impeccable catalog thus far, and this is just a bomb. Disagree if you like, but unless you're already a fan, I don't really recommend checking this out.
Overall Score: 4
Highlights: Free Goat of Leviticus, Dry Love, Free Eyes
Posted by maskofgojira at 10:57 AM