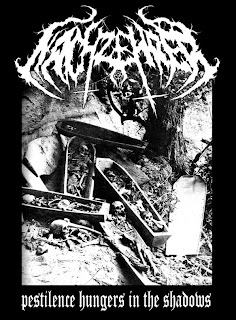 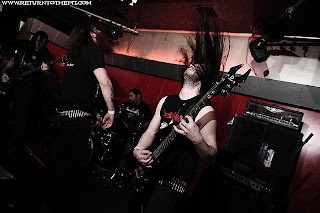 If you had spoken to me maybe three or four months ago, I probably could have spoken to you about blackened thrash, but wouldn't have been able to really tell you a band that I really enjoyed. Since then I've really found myself enjoying quite a few groups from the sub-genre and I grown to really become a fan, despite not being a huge thrash guy. So when I was sent this album, it was obviously gonna get covered.
It's hard to say what I was expecting when I pressed play on this. I knew, sonically, what the band was about and stylistically what they were, but coming into a record actually knowing what a band you've never heard before can be a bit odd. I think these guys are a bit more black than thrash, in my opinion, as opener The Awakening demonstrated to me. I'll admit that it might just be my taste being a bit unrefined when it comes to blackened thrash and I haven't listened to enough of it, but I came in thinking there would be more thrash, just because most of the bands I enjoy tend to have more thrash than black. Not to say that this record didn't excite me, because there were songs on here that definitely made me want to bang my head and punch a hole in the wall (that's meant as a good thing in my book). I do have to say that there were a couple of spots on here that felt a little awkward to me, the opening riff of Howling At A Winter Moon for example just sounded a little off, but that might just be me.
Overall, I think it's a strong release that has a lot to offer a listener if they're into this style. It's a strong little release that shows a lot of potential for the future if they continue to harness their songwriting chops the way they demonstrated on here. Definitely check it out if you like black metal, thrash metal, or a blending of the two.
Overall Score: 7
Highlights: Barsarkar-Gang, Black Order of The Goat, Atavist
Posted by maskofgojira at 9:10 AM