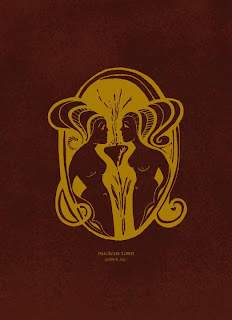 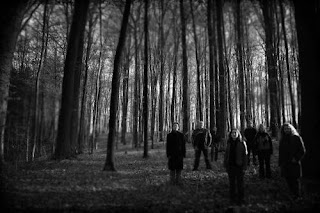 I'm not sure if it's obvious or not, but folk metal is not a style of metal that I particularly care for. More often than not, a lot of the bands that are tagged with "folk metal" are bands that sing about booze and parties while they dress up like vikings, very few groups actually incorporate folk music into their music though. Nucleus Torn is a band I've only become familiar with within the last six months of so but have absolutely fallen for them.
I should make a note about the style of this band to all those that have not yet heard Nucleus Torn yet because this is not your average folk metal, as I just pointed out above. It's not danceable, party metal, this falls more in line with neo-folk and singer-songwriter music most of the time and only bridges into metal on certain occasions. What that means for those of you who aren't aware of those styles is that you will hear more somber, acoustic guitar led sections and songs more often than a heavy and pounding metal section, and that goes for their entire discography really. If it helps you imagine it, the opening title-track, Golden Age, is twelve minutes long and doesn't cross into heavy distorted guitars once, not that it ever needed to. In addition to that, there's quite a bit of variety in terms of instruments on here, it's not a only a guitar led album. Throughout all of the band's work you'll find the use of piano, flute, upright bass, dulcimer, violin, and cello, among other instruments used within their songs. They manage to create such a lush and orchestral sound without really going into cheesy or overly complex arrangements, something I hold in quite a high regard and definitely commend them for being able to do.
When putting this album next to some of their other material, it doesn't stand out as being quite as dark as their earlier work. Saying that shouldn't make you imagine more uplifting parts, but it's a lot less melancholic all the time, if that makes sense. I don't believe I've heard the band cross into territory that's so beautifully mournful as on Silver before. I probably should have said above that this is absolutely beautiful music, when it's soft it sounds so delicate and quiet and turns out to be quite moving. When this thing goes distorted though, it can be used to either go full-on blackened death metal kind of way, which it does in the closer Death Triumphant, or it can be used more as an accompaniment to enhance the power of a part. Ash is not a heavy song, it's still very contained within the folk realm for most of it's running time, but when the distorted guitars are used, it isn't used to bring in a sense of anger or rage, but enhance the power of the melancholic beauty. The closer is really what I consider to be the only real "metal" song on the album, and Christian Kolf, of Owl and Valborg among others, guests on vocals and brings an interesting take to the song. I'd also say that this album flows a lot more than the other material as well, as each track does lead into the next quite seamlessly, though whether or not that's intentional I'm not sure of because each song still stands on it's own.
This isn't a band I anticipate people just jumping into because they aren't really "metal" all that often. Personally, I think these guys are creating some of the most beautiful music this side of Anathema and Devin Townsend. Definitely check it out if you're interested in real folk music with elements of metal thrown into the mix.
Overall Score: 8.5
Highlights: Golden Age, Death Triumphant
Posted by maskofgojira at 9:54 AM