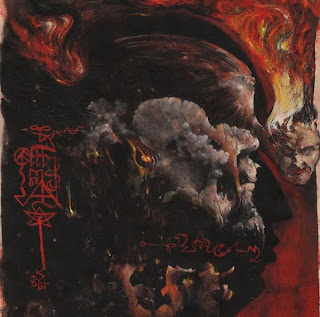 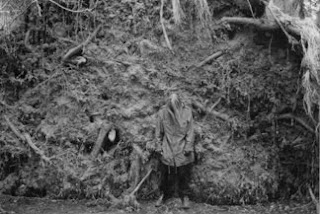 S. Devamitra, the sole member of the project known as Dead Reptile Shrine has been at work throughout the last decade releasing some of the weirest black metal you've ever heard. When I say weird though, I'm not talking about progressive or avant-garde, I'm talking about straight-up raw, noisy, and nearly impossible to tell what's going on weird. This new album is obviously his most ambitious undertaking yet, being a double-album that trumps two hours.
When you come into a Dead Reptile Shrine album, the best frame of mind is to approach it with an open mind, because most likely you will have no idea what to expect, whether or not you've heard/read anything about it. In this double-album, you'll hear some of Devamitra's signatures like the really lo-fi black metal-meets-doom-meets-noise and the demented acoustic songs, but you'll also find some of the darker and more ambient sides of the project as well. The drone and dark ambient sides of the project aren't used as regularly as the others are, and were most utilized on the collection of demos that was released back in 2001. The comparisons to groups and projects like Dead Raven Choir and Circle of Ouroborus are inevidable and have been used before, though this project feels a bit more of the punk side of things, and has for a while.
So, with this album, with it's extended running time, what makes it different from the other releases Devamitra has put out? I'd say it's a bit more chaotic than some of the other stuff he's done in the past, in terms that he actually sounds psychotic during several of the vocal tracks. There are also more than a couple of tracks that feature riffs and melodies that are considerably more catchy than a lot of the older material the project has generated. Having said that, this album also holds some of the project's most out-there moments yet. There are also some quite odd nods to the depressive black metal genre, Solstice d'Hiver for instance really made me think of Lifelover. There are moments where it reaches into more ritualistic ambient sort of vibe, Summer Forest's Magic also has the boogyman vocals. I'm not gonna lie, some of the stuff on here is a bit silly sounding, but there wasn't any part of it that I thought was comical or bad enough to laugh at.
I was actually surprised how much I enjoyed this album, considering I'd like to think of myself as only a casual listener of this stuff. While it isn't exactly mind-blowing, most of it is well written and it's constructed in a way that doesn't make the album drag. Check it out if you're into raw black metal, punk, noise, dark ambient, folk rock, etc., chances are you'll find something in here that you'll enjoy.
Overall Score: 8
Highlights: Weapon, Crucifixion and Drowning, Beholding The Necrocult Relic, Summer Forest's Magic, Possessed By Infinity
Posted by maskofgojira at 10:23 AM