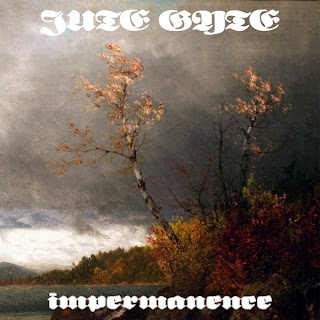 I know, I was just as surprised as you when I first saw that Jute Gyte released a second black metal album this year. In previous years, it's been pretty much one black metal release a year, with various other and more experimental albums filling out the rest of the year. Not that I'm complaining, but I thought it was pretty nice.
It has to be said that when I first discovered Jute Gyte last year with "Young Eagle," it was at a point when I was interested in underground black metal, not to say that I'm not now, but it was a different phase. When I heard his take on the Krallice-esque black metal sound on "Verstiegenheit" earlier this year, I was still very much a fan of his output. When I put this on, and really it should come as no surprise to anyone that's listened to his black metal output thus far, it is a very different experience. All of Jute Gyte's metal output has showcased a very raw and chaotic sound, which has often been quite noisy and atonal as well, but on here, I dare say it's the most weird and all of the above as ever. I'd also dare to say that this is his cleanest sounding release in metal yet, or what might be better to say is that it's his least distorted effort, because it is still quite raw sounding, the guitars are just a lot more discernible from underneath the hiss of distortion. I'd like to compare the sound of this record to noise rock because on more than on occasion it does go down similar paths of discordance and dissonance that one would often hear from groups in that genre.
To call this record his Adam Kalmbach's most melodic might be a stretch, but it is certainly his most focused in terms of songwriting. Melodies and patterns are a lot more apparent and are repeated in much more obviously than in the past. It might just be me, but this might also be Kalmbach's most accessible and catchy record from Jute Gyte yet as well, with something from nearly every song sticking with me, which hasn't really happened with any other Jute Gyte record yet. In my opinion however, my favorite parts of this album were the tracks where things were a bit slower and more melodic, Partial Wing for example, and wasn't so out of control. I know this is going to kind of contradict what I said above, but this might be my least favorite Jute Gyte record, because a lot of it just didn't leave me wanting more, unfortunately. Previous albums have left me on the edge of my seat really looking forward to what was going to happen in the next song, where this one was a bit iffy for me, some songs I really, really like while others were just kind of ok.
I still really like this album and it is certainly a unique listen, but be warned that it will not be for everyone. Personally, I like his last two releases, but this is certainly still very original and high quality stuff. If you want to hear something really weird that sounds something like noise rock mixed with black metal, check this out.
Overall Score: 8
Highlights: Partial Wing, Hermit Haunter of The Lonely Glen, The Old Hills' Indifference
Posted by maskofgojira at 10:02 AM