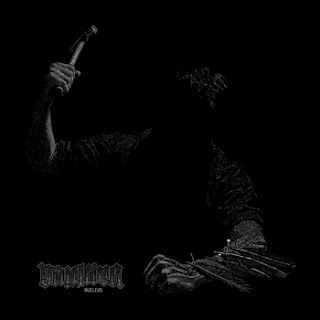 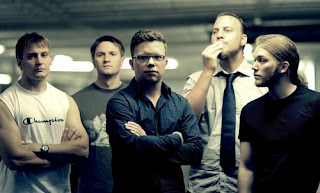 I haven't reviewed any grindcore in a while, so here's a record I was sent by the band themselves. A lot of the grindcore albums I've listened to this year have been really good, but most of those were released earlier this year, so I was more than interested when I was sent a grindcore album. How much can you expect from a grindcore album?
I can remember the first time I listened to this album I wasn't sure if the band's Bandcamp page was telling me the truth in terms of genre. Place of Fear is a short atmospheric, post-rock-esque intro that felt like an eternity the first time I heard it because I thought the album was going to just explode at any point, which didn't end up happening until the next track 80 Gy. Now, I don't want anyone to assume that when they listen to this they'll be getting something in the vein of Napalm Death or Nasum, this is closer in line with groups like Botch or early Dillinger Escape Plan with a death metal vocalist, meaning, it's very fast and technical. Spastic is another word that fits as well on certain occasions. At their most technical moments, They Always Return, you get the band delving into angular hammer-on/pull-offs and strange tapping patterns that just swirl around you and make no attempt at trying to slow down for you to get a grasp on what's happening. That's not to say there aren't any slower moments on here, but the band certainly aren't slowing down so you can catch your breath, it often like this, play fast-fast-slow down-speed up-fast-song ends, with exceptions obviously, but that's how I felt about most of the tracks that topped the two minute mark.
Unlike other groups that are doing a similar style to these guys, I found that not were these guys more proficient and interesting musically, they had elements that some might see as random and out of place, but they really helped to make this stand out. The use of melody on here, no matter how short the line is, helps to make a song stand out among the all notes flying past you. Granted, melodically, these guys definitely take their influence from the tech-death side of things, with harmonies flying around you in pretty much every song that harken back to groups like Death or Necrophagist. Like I said earlier as well, I really like the vocalist on here, he has a great sounding guttural bark, though I'm not sure if that's really the best way to put it, I just think he sounds really good. I didn't really understand the placement of interludes throughout the album though, tracks like Permafrost and Touched By An Unknowing didn't really add anything to the album and actually served to distract me from the intensity that other songs had provided to me. In my opinion, this album would have worked a lot better if there was maybe one interlude in the middle of the album or if it was a straight grinder.
It's a really interesting album with some really great playing and great vocalist, in my opinion anyway. I think there are some moments that could have been elongated or repeated and some tracks, the interludes, could have been removed, but beyond that it's a great grindcore album. Definitely look into this if you're a fan of spastic mathcore/grindcore stuff, I doubt you'll be disappointed by this.
Overall Score: 8
Highlights: Arktis Winter, To Dig A (W)hole In The Void, Behind
Posted by maskofgojira at 4:05 PM