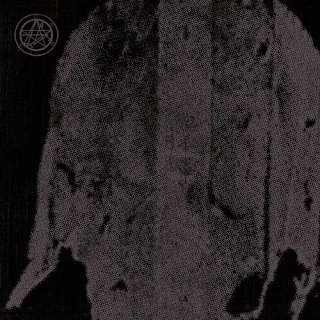 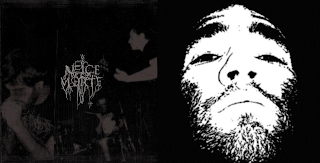 Earlier this year we got the debut from Neige Morte, a strange and very left-field black metal album unlike that of almost any other band I've heard before. So with this we get them pairing up with a project of equal ambiguous stylings and categorization. What could you ask more for if you like weird and extreme black metal?
I'll start with The Austrasian Goat's song for the split, The Gracious Fall of The Morning Lights. Now, I'm a new fan of the project's work and I will say that I haven't listened to it a whole bunch as of yet, but when it comes to this track you get something very different. The eleven minute track builds from the base of a very dark and hazy sounding folk song into something that does resemble his more metallic work. Tremolo picking and blasting drums enter the picture after a while and pretty much redefine what kind of song you're actually listening to is, which happens a couple of times actually. You could pretty easily cut this one track up into three separate songs if you wanted to, to be honest. The dark folk from the atmospheric black metal from the more ritualistic sort of folk rock.
We Who Are The Worm is Neige Morte's contribution to the split, another eleven minute song. Unlike it's partner in crime on here though, this track is not nearly as defined as clearly cut into sections. It's a steady trek upward from the very beginning of the track, opening with very distorted bass lines that slowly bring in the drums before finally bringing in the vocals and guitar. It's a very abstract song in that, a lot of what the guitars are doing aren't "traditional" black metal, though it does escalate into that before the end of the song, a lot of it is much more avant-garde.
It's a nice split that showcases some real up and coming talent from the experimental black metal scene. I hope that people do check these bands out because they are definitely worth it. If you're a fan of experimental black, doom, and sludge metal, I don't see any reason why you wouldn't be able to find something in here you would like.
Overall Score: 7.5
Highlights: The Gracious Fall of The Morning Lights
Posted by maskofgojira at 11:20 AM