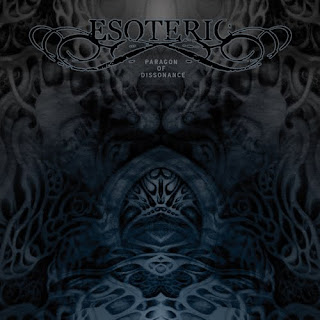 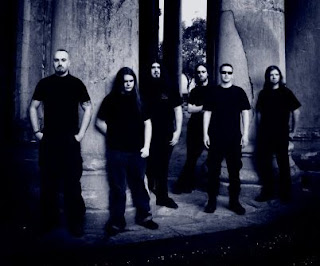 I'll come out and say that I will be biased in my review of this album, I'm a big fan of Esoteric. In the entire funeral doom scene, Esoteric is probably my personal favorite. Whenever these guys get together to record new material, which since I discovered them has only happened once before, it's always great stuff.
My love for Esoteric began several years ago when I was looking into doom metal, more specifically funeral doom, as I had only recently discovered the genre while scouring through endless pages of doom bands on Youtube. I stumbled across a band called Esoteric and of course clicked on it because I thought it was a pretty badass name. Suffice to say that I was immediately blown away with how slow and crushing their sound was, I then looked through various site to find out whatever I could about the band, this was around the time "The Maniacal Vale" was coming out. I've been a fan ever since. Their sense of melody and timing has always just sat well with me, it hasn't ever been too droning or too long and they've always done interesting things to make long tracks worth listening to. Even in their earliest material, the band demonstrated a knack for writing interesting songs that weren't just your average funeral doom.
With probably their most accessible release to date, this album sees Esoteric moving away from the droning elements of some of their previous material and including even more elements of mid-tempo riffs and melodies into their sound. Having said that, I don't want to give the impression that these guys have given up playing slow, because they certainly haven't, as Torrent of Ills shows with applaud, but there's a lot more elements that I find myself more inclined to enjoy. With the inclusion of more mid-tempo elements you also have a larger reservoir of psychedelia being drawn upon with both of these discs. More so than any other Esoteric release, we see the band experimenting with more spaced-out and heady atmospheres. The influences from old prog and space rock can be heard throughout the album, especially in the choice of synthe sounds and cleaner guitar tones. Tracks like Non-Being and Aberration truly showcase the new found atmospheric textures that this album contains. Also, much like their last few albums, this album is not muddy sounding, which had been the case with their early work and is the case with many groups and projects within the genre. The production on here is nice and clear sounding, every musician can be heard, from the bass and synthe to the guitars, drums, and vocals, something that really separates the great funeral doom bands from the really, really bad ones. It is truly a great record.
This album is definitely the band living up to the standard I set this record at, actually surpassing it at some points. I really hope more people go an check these guys out because this is band that isn't super well known and I want more people to check them out. Do yourself a favor if you're a doom fan and check this band out.
Overall Score: 9
Highlights: Non-Being, Disconsolate
Posted by maskofgojira at 9:14 AM