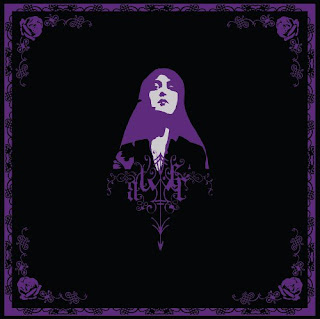 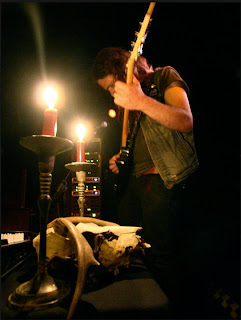 Aelter is a project that I had only recently been acquainted with through a friend of mine and through some other circumstances. Since hearing about their association with Wolvserpent, this is the solo project of guitarist Black Green, and the signing to Handmade Birds I was more than excited to hear this new album. After having listened to his previous two releases under this title, finally getting my hands on this LP almost made me want to weep, no joke.
Now, I should say that while this is definitely doom metal, it is certainly more of an acquired taste than you might expect. In addition to being instrumental, this LP features a more atmospheric and ambient based sound than on Green's previous two outings with this project. The first half of this release is a twenty-four minute ambient piece that will most likely divide audiences if they haven't yet been exposed to Aelter's brand of doom yet. The low drones and melancholic synthe tones that create the mood are absolutely perfect at creating a cold and bleak feeling within the listener. It's unlike Green's previous work with the project in that other releases haven't contained such a cold atmosphere before. I've said it before, but despite the length of this song, it never felt long to me. It's the type of ambiance that you can really envision landscapes to, which is good from my point of view, and for myself I can really see the portrait that came with the LP. A dilapidated cabin falling apart in the dead of winter, snow covering everything, barren trees falling down, it's a lot more awesome than it sounds.
As for the second half of the album, it's a lot more "traditional" in the sense that it's more of a metal song than most of the other material Aelter has put out so far. It's got a much less hypnotizing sound than the first half of the LP but is by far a lot more engaging of a piece. There's a lot more movement happening as this track progresses, which is probably what I think is going to appeal more to people who are new to this project. In comparison to the first half, this one feels a lot more like a resolution was reached within the track. The first half was more of a cold and desolate ambiance that was maintained throughout the entire length of the song, where as this song opens with, possibly, a darker mood, in an almost black metal fashion, if you can believe that, before moving into a more post-rock kind of section that just builds up this beautiful ambiance. What's weird for me to say is that the heaviest part of the song is the part where the guitars drop out and leave the keyboards to handle most of the mood, with other instrumentation as well. The chanting vocals on this track also adds another level to how the ambiance manifests itself. Like I said above, the opening of this track is probably darker than the first half of the LP, and while the middle of the track does offer what could be seen as a glimpse of light, after that you descend back down into the pits of cold despair that you thought you had risen out of before.
It's a great album and one that I'm proud of own and I can say with certainty that I am definitely a fan. Easily one of the best "doom" releases I've heard this year and one that I hope will make more people into fans. Definitely try and get your hands on a copy of this before they're all gone, if you like atmospheric doom, etc, you'd be wise to check this out.
Overall Score: 9.5
Highlights: Every Track Is A Highlight
Posted by maskofgojira at 8:57 AM