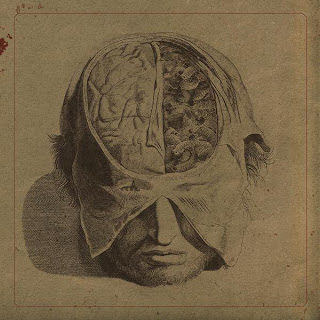 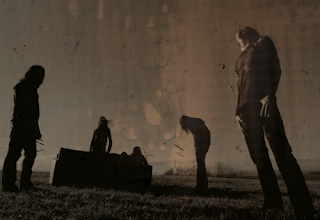 As my interest in black metal had grown with me within the last several years, I've noticed that my interest in two particular countries scenes have definitely become my favorites, the French and the Germans. If you'd paid attention throughout the years, you'd notice that a lot of the material coming from Germany is quite good. Farsot is one of those newer groups that definitely caught people's attention with their debut, "IIII," and this follow-up has been pretty highly anticipated ever since.
You know, after I'd say a couple years of not listening to Farsot, due to just listening to other albums not because I didn't want to, the opening of this album seemed really fresh to me. The vocals first struck me in a way where it almost sounded like a sample, which I think was used at first before transitioning into a more throaty spoken word which really was seamless. Somewhere in the realm of being progressive and atmospheric is where you could kind of put this band, cause both sides of the genre are well demonstrated on here, though not always together. I think that the band has some really interesting ideas being used throughout, whether it be through chanting, softer clean sections, or more psychedelic influenced guitar riffs, and I'll admit that not all of it works, but I found the greater majority does work. In addition to that, I do enjoy that this record does contain a lot more songs, because "IIII" really did feel like an album of movements rather than an album that had songs.
I've read some mediocre reviews of this album and I'm not sure why people feel as negative about the album as they do. For myself, this is the type of growth that I like bands to go through, once again, there are flaws in here, but it's not all that glaring or out in front enough to really make that big a difference. I do feel that while this album is a lot more well written than their debut, it is less cohesive, if only because it is a more song based album it loses some of that cohesion. The samples that are used throughout the album act to kind of hinge the whole thing together, which at times feel a little forced, but I do think have a place. I also believe that a couple of ideas from here can be traced back to influences of the band, or what appear to be influences, hear the softer passages like the interlude 7 or the constant shifting in a track like Perdition, like Opeth or Secrets of The Moon. For myself, I kind of think when people will look back at Farsot's discography in a couple of years, they'll see this album more of a transitional one from the more atmospheric based debut into a more progressive, but still atmospheric, one.
In the end I do think this is a nice album with a lot of good ideas, but ultimately I do view it more as a transition sort of release. I think the next album will see the band develop this sound into their own, at least in my opinion I hope they do. Very solid, and definitely worth checking out if you want to hear an interesting blend of ideas in your black metal.
Overall Score: 8
Highlights: Empyrean, Perdition, Withdrawal
Posted by maskofgojira at 6:22 PM