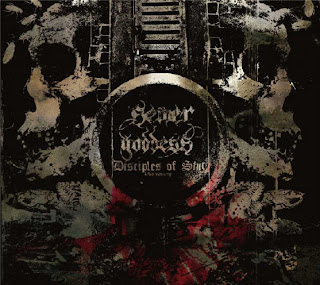 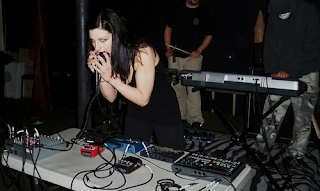 I'm not sure if I've mentioned it before or not but I don't really care for live albums. I've never heard Sewer Goddess before as well as never heard a live noise album, so I decided to give this record a go. It's like a completely new experience for me, so I was excited to give it a shot, but don't expect it again.
This was quite the album because it really came across differently than what I had expected. This isn't the sort of intense, brutal feedback and noise that I expected having watched live videos of Prurient live, instead it's a lot more reserved and tense. It's interesting because you can definitely tell that it was recorded live, people can be heard talking, and you can hear in the atmosphere surrounding the music that it was recorded in a pretty open space. The reverberation that just echoes throughout these recordings is very audible and, in my opinion, actually enhances the music because it comes across as a different kind of entity than I think it would have if it was done in a studio. In my mind, I'd imagine the studio versions of these songs would be a lot more intense and brutal, but more "typical" of the noise sort of genre. The drones and noises come across as a lot darker than they might have been if it was in a studio, which to me is a lot better and more unique sounding. Like I said, I'm not a big live album fan, but having never heard any of the original material, I do feel that this is a very good look into Sewer Goddess' style while bringing something different to it, or at least that's what I'd hope. With all that being said, since each of the five tracks on here was recorded in a different places and each does personify a different kind of room ambiance, as such the last song, Slavepiece, is the most raw and stereotypical of the noise genre.
It's good and I enjoyed it for what it is. I mean, it's still rooted very much in noise and drone music so it's not the type of fist-pumping or headbanging record you'd put on to have a good time to, but it's good. Check it out if you're into more experimental noise and drone, even doom to an extent, I think you'll enjoy this.
Overall Score: 7.5
Highlights: Chained to The Cage of Existence/A Lifeless Dreaming
Posted by maskofgojira at 6:12 PM