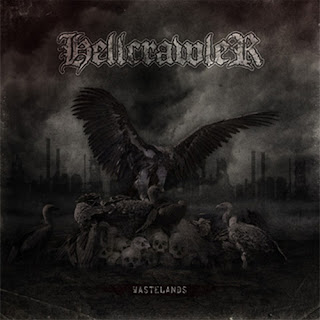 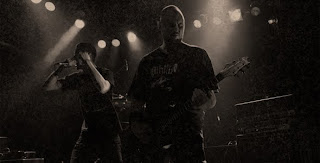 Let's talk about death'n'roll, a sub-genre that is pretty hit and miss for me as well as a lot of other people. I'm not sure what band comes to mind when someone mentions it to you, but for me, the one band that always pops into my head is Entombed. So when I got this album and it was labeled "death'n'roll," that's obviously what I go in expecting.
I'll come out and just say that I know bands don't like to be labeled and placed into genres, but as soon as this thing starts up, death'n'roll proves to be very appropriate. I mean, and I don't mean for this to be negative, but there really isn't too much to this record. It's death metal injected with a dose of thrash, crust punk, and hard rock and then put into a meat grinder and just pumped out. Now, like I said above, I always think of death'n'roll, I always think of Entombed, and unfortunately, though not unexpectedly, this does not rival them in the least. I mean, it's not a bad record, it just feels a bit average to me, there are solid riff, some decent growls, and some raging solos, but it all feels a bit samey to me. I've said this many times in the past, but I love my death metal to sound old-school, filthy, grimy, and disgusting, and this really doesn't give me any of that. I don't know, I guess this just didn't live up to my expectations for it.
I really don't want to make this sound like a bad record, because I am well aware that there will be people who will think this is an amazing record. All the songs on here are quick and punchy, really just going for the jugular and then moving onto the next track. They're all pretty straightforward, and actually pretty melodic on more than one occasion, hear the more melodic take on Firefly Powerplant or the acoustic break on Yet Again The Greed of Man for example. It's the type of deal where each song is actually pretty distinguishable from each other, which I do have to give the band points for because that's something that even older and more seasoned groups can't do. Sonically, as I said above, it has a lot different elements, and that's a point that I'm sure will draw a lot of people as well. I don't even think any of the songs on here are bad, most of them are perfectly fine with nothing wrong with them whatsoever, they're aggressive and pounding, but in most cases, that's about it. It has it's moments, but as a whole, I'm just not that big a fan of this.
Overall, it's a decent record that I'm sure will appeal to plenty of people who like death metal that's a bit more accessible, but it's just not for me. Don't let me discourage you from checking this out though, I do feel like this is a band that will appeal to a lot more people, I'm just not one of them. Check it out if you want to hear some rocking death metal anthems, I doubt you'll be disappointed.
Overall Score: 5
Highlights: Rattlesnake Tavern, Post Apocalyptic Revolt, Yet Again The Greed of Man
Posted by maskofgojira at 7:07 AM