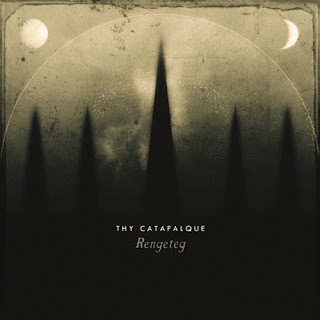 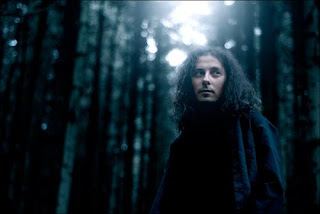 I first found Thy Catafalque a couple years ago with their last album "Róka Hasa Rádió," which wound up in my top albums of that year. It was just one of those albums that blew away any ideas of what I thought it might have been and it remains one of my favorite releases from that year. There's been large gaps of time between releases for the project so when I first saw that a new album was going to be released this year, I can say that I was anticipating it quite highly.
Since the last record, main man Tamás Kátai has stripped the project back down to a one-piece, after working as a two-piece for the last couple of releases. This has allowed Kátai to bring the project back to his roots, so to say, and make this album a more aggressive and straightforward album, in comparison to his last couple anyway. Songs are shorter, a more defined metal sound, once again, in comparison to his other work with the project, is used throughout, despite never being one to just be a regular band. Though the songs are more streamlined and compact it's still far from being an average sounding black metal album. Clean vocals, folky melodies, death metal riffs, and big, poppy keyboards are used throughout, so I don't imagine all the kvlt kids in their basements are gonna come out of hiding to buy this, but for the weirdos like me how love weirdness in their metal, most definitely. This album also feels a bit more atmospheric than their other material, with a lot more emphasis on very open sounding soundscapes surrounding the album, it at times recalls more of an atmospheric black metal kind of vibe, at times though.
In terms of songwriting, I can't say a bad thing about this project really, because their songwriting has been top-notch since day one. Their melodies are extremely catchy, to the extent that I'd call them poppy, and are really easy to get stuck in your head. Songs like Kel Keleti Szél and Trilobita are just so catchy that they're pure sugar to my ears, they're just so fantastically sweet and memorable it's not even funny. Az Eső, Az Eső, Az Eső is as close as you're gonna get to a pure pop song on a metal album this year, or at least a good pop song, in my opinion, as it makes use of almost not distorted guitar and is basically a dancy folk-pop song. I'm not gonna say the entire record is full of these super poppy numbers though, the two longest tracks, opener Fekete Mezők and Vashegyek are more progressive and adventurous than super melodic. Tracks like these are more or less closer to material the band has worked with in the past, lengthy pieces that explore multiple different avenues of texture and melody. In all honesty, I feel like the ladder song is actually a bit too long and just sort of trails off at the end, which is a bit disappointing cause I loved the long ten plus minute epics on the last album, but feel like this fourteen minute piece just didn't make full use out of it's time. On it's own however, I do feel that it works, but when I listen to the album as a whole, like I just said, it feels a bit too long.
Another strong album from Thy Catafalque, Hungary's premiere metal project as of right now. I definitely recommend you checking this album and the band's past material out as soon as you can, you will not find another band like them out there. Fans of avant-garde and progressive black metal, take notice if you haven't already.
Overall Score: 9
Highlights: Fekete Mezők, Kék Ingem Lobogó, Minden Test Fű
Posted by maskofgojira at 10:01 AM