Hypsiphrone - And The Void Shall Pierce Their Eyes (2011) 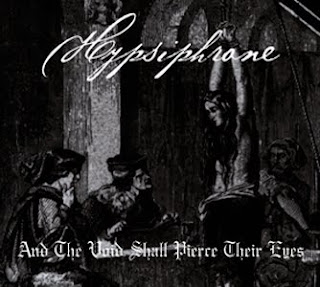 The title of blackened noise is something that I'm sure sounds very unappealing is actually a style that has come to prominence with some very good bands. You'll find that a lot of bands from this style are actually quite interesting and doing something that is worth listening to. This debut was sent to me and I was quite interested in it from the second I turned it on.
It should be said that this is the type of album that will definitely not appeal to typical metal fans. To an extent, I can call this avant-garde because there are a lot of different elements being used within it. I'd still say that the labels of black noise are appropriate, but it's not quite as noisy or as metallic as the tag might suggest. On here, you get a totally out-there amalgamation of black and doom metal, dark ambient, harsh noise, drone, and industrial music, to name a few of the major ones, and it's totally insane. It's an album that demonstrates beautiful atmospheres within such disturbing and dark drones, An Epiphany Written In Blood being a good example of such. The fusing of these sounds, at times, is actually a bit jarring and makes for a pretty intense listen as both foreground and background music.
While I believe that the album does a very good job at fusing together genres and making them work in a very interesting way, the main fact that really grabbed me at the beginning of the album, I felt, did not continue throughout it. The first handful of songs on here, while they might not exactly be my favorite on the disc, all contained this very morbid, tense, and fragile sort of structure to them, as if it was just barely being held together as well as an extremely disturbing atmosphere. On latter tracks, while it was certainly still being used, it just didn't feel as effective. The more straight ahead dark ambient approach taken on Cornucopia Saluti or other tracks near the tail-end of the album just didn't feel as enthralling or intriguing as earlier tracks kind of made the album out to be. I think it's an album that has an lot of cool ideas and these guys definitely know what they're doing sonically, cause I like the sounds on here, but I think they need to work on making it a bit more interesting to listen to. I don't want to sell this thing short, because I do like it, but I think that what I was coming in expecting of it was different than what I got, and even the opening tracks were a bit misleading to me as well.
Overall, it's solid and I hope that people look into it cause it's quite different from anything that I've heard. Like I said above, this really isn't the type of release that is going to excite everyone, but it's certainly worth diving into and exploring. Check it out if you're into weird droning black metal, dark ambient, or noise music, you'll find something in here to like.
Overall Score: 7
Highlights: Bleak Old Shadows, Resurgence of Mors Sexualis, Worlds Are Wounds of Desolation
Posted by maskofgojira at 9:00 AM