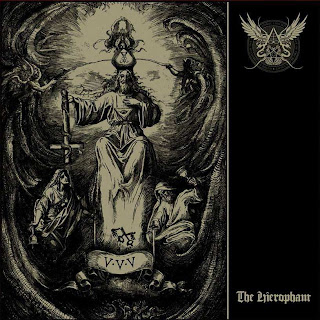 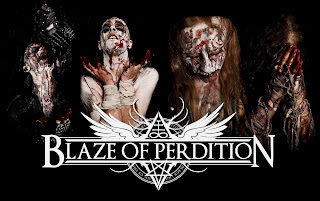 Last year I covered Blaze of Perdition's debut full-length "Towards The Blaze of Perdition" and was quite impressed with it. The band soon released an EP, which I kind of glossed over and instead decided to look forward to the debut of their side project Oremus, which I thought was pretty poor. So I was pretty interested when I heard about this album coming out, hopefully it followed closer to the sound of the debut.
I think that the first thing to say about this album is that the songcraft has increased quite substantially since their debut came out. Both in terms of just writing something memorable as well as structuring songs in more interesting way. This is still a pretty straightforward, modern, black metal record for the most part without much diversion from their previous album's sound. There's still a focus on melody and aggression above pretty much everything else, but like I said, they're writing songs that are more memorable. While I thought their debut had a lot of good moments, it definitely had room for improvement, this album really is what I hoped the band could evolve into.
The album really presents itself well, the opening two songs, the title-track, The Hierophant, and Return to The Womb are both great melodic black metal songs that just drive forward like their old material, but with a few added elements in there as well. I really have to hand it to the guitarists in the band because they definitely stepped up their game for this album, like I said, it is a lot more catchy. Their solos are definitely a lot better, hear the one in Gospel of The Serpent's Kin, showing a lot more variety and emotion. That track in particular also shows the band at their most forward thinking, not really progressive, but there's a lot more focus on dynamics and ideas, including slower and more mid-tempo sections into it's seven minute length. I'm pretty much over listening to black metal that just blasts throughout an entire song, which is one of the reasons why I never got into Dark Funeral, just a side note, but is one of the reasons why I thought this band was definitely worth keeping an eye on. Despite the fact that they do blast quite a bit, there's always something redeemable in the song to redeem it for it's rather inconsequential use the blast-beat. There are also songs that make very little use of blast-beats, which are actually some of the better songs on here in my opinion.
I was very impressed with the album and it's definitely a step up from their debut. I can only hope the band continue to get better with each release as they've demonstrated to me with this album. Definitely check this band out if you like more melodically inclined black metal.
Overall Score: 8.5
Highlights: The Hierophant, Back to The Womb, Gospel of The Serpent's Kin
Posted by maskofgojira at 10:56 AM