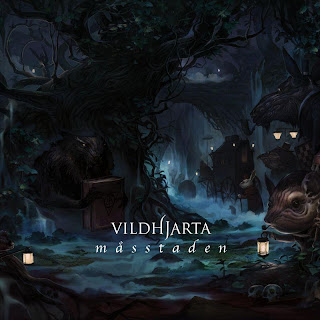 After years of waiting, for me and many others, Vildhjarta have finally released their debut full-length. This is the last of the big four djent groups to release their debut full-length, which include Periphery, TesseracT, and Uneven Structure. With the tracks that have been released before this album I know that some people were a little shocked by the band's direction.
I think the comment that said it best was that this is the djent band that will appeal more to "pure" metal heads. If you've had a problem with the sub-genre of djent in the past this may be the album that turns you into a fan, of at least one band to emerge from it. A lot of the stereotypes that the genre has been come to make use of are either turned up to the max on here or removed all together. I know of the problems some have had has been the whole "pretty boy" sort of look that bands like Periphery or TesseracT have kind of embraced, which is clearly not the look of this band at all. Then there's been the vocal style, which has included more of that post-hardcore, the newer brand of it from what I understand, and poppy sounding clean vocals and rather average to decent growling and screaming, as far as those styles go in comparison to the big wigs in death and black metal, which is once again, not a problem on here, what with clean vocals popping up in one song only, fan favorite Traces, and the rest of them being dominated by growling vocals. Then you have the fact that there are two vocalists, which has rarely worked well in my opinion, a lot of the time the vocalists are either indistinguishable from each other or just don't work anyway, these guys not only work well together but clearly have their own voices, at least to me. I could go on and on about how these guys manage to defy their own sub-genre tag and yet defined it as well.
Make no mistake, this is definitely a band that has worked in the djent style, the riffing style is based in groove and rhythmic syncopation. What you separates them from other bands however is their use of chaotic riffing and ultimately their unpredictability in their patterns. The breakdown at the end of Eternal Golden Monk is not your average chug-chug-chug-break-chug style breakdown and has a lot more dissonance. This is something that you'll find throughout several songs on the album, breakdowns that are not in the now conventional style. The clean sections also mark an interesting contrast for the band's low and heavy style, with bright and atmospheric cleaner moments that usually bring in more melody and ambiance into a song. More melodic songs are present without the cleaner sections but are not as frequent, with When No One Walks With You really being the stand out in that regard, combining their groove based sound and making it possibly the most melodic and accessible song on the album. Most songs don't come out as easy sounding as that one and are much more staccato and feature more unsettling atmospheres. It's worth pointing out that not one track on here actually sounds like another, with the exception of the band's own style, but what I'm trying to get across is that each of these songs can stand alone despite being linked on the album.
I think it's fantastic debut and one that I can only hope people at least give a chance. The only real problem is that I think there might be one interlude too many on here, but as a whole piece of work it fits together flawlessly. Definitely check this out if you want to hear an interesting new progressive metal group with a nice take on the genre.
Overall Score: 9.5
Highlights: Every Song Is A Highlight
Posted by maskofgojira at 9:44 AM