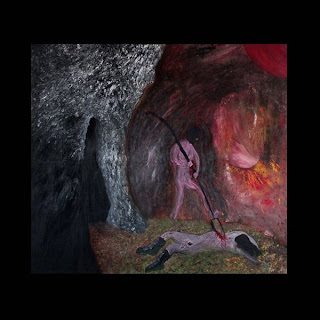 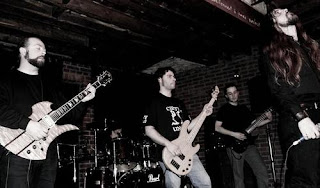 Somewhere along the line in the evolution of the death/doom genre, we lost something. Back when the Peaceville three first came out there was a romantic nature to the style, something that I haven't found in the style since. When I'm looking at new bands in that style it is something that I do retain hope for.
Right from the get-go this band makes a point to try and distance themselves from any of that romantic nature of their predecessors and instead bring something a little bit different to the doom genre. Not that it's unheard of to do, but the Gregorian chanting that opens the album, Pulvis Et Umbra, acts as a precursor to what occurs in the next four songs. The music is a bit more mid-tempo, for the most part of the album, than I expected but has a certain something that just made me feel like elements from the opening chants was carried on for the rest of the album. When I saw the band's influences while looking them up, it hit me that the atmospheric quality of this band is very similar to their brethren in groups like Evoken, Mourning Beloveth, and Ataraxie. The very gloomy and near depressive nature of the super slow moments works in contrast with the more mid-tempo material that's more groovy and rocking. In addition to that, I was really surprised by the ending of East of Eden, the album closer, by the fact that it really defies what the rest of the album was, stylistically, by morphing from a moody doom song into a blasting black metal one within it's closing minutes.
I was very impressed with how these guys crafted songs because it wasn't the same speed throughout an entire song, an entire song wasn't dedicated to just slow riffs and crushing distortion, there was always a pause for a moment of more somber clean passages, a moment of reflection. While the vocals certainly bring a sense of emotional depth to the band's sound, for myself, I found that the most emotional sections of this album were the cleaner interludes in songs. It's just one of those things that I found enhanced the album, even if it isn't an original idea, it works nonetheless. Just to touch on the vocals again for a second though, most of them are delivered in a great baritone clean voice that really resonated with me, think somewhere between Peter Steele and Aaron Stainthorpe, but there were utterances of growling and moaning, as well as the odd section where he went into an almost Silencer-esque wail which surprised me. I feel that it's important to recognize the bass playing on here because in my experience with doom metal, in general, I don't recall hearing a whole lot of bass players really coming out and playing something out of sync with the guitars and so it really stood out for me in the last two songs on here.
I wasn't sure coming into this how it would be but I did enjoy it. I can say with certainty now however that this is not an album to listen to in your car, at least in my experience with it. But if you're a fan of doom metal in some capacity, I think you'll find something you'll like on here.
Overall Score: 8
Highlights: The Twilight Prophet, East of Eden
Posted by maskofgojira at 10:05 AM