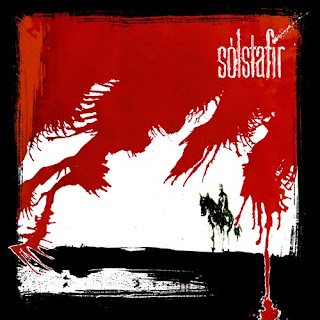 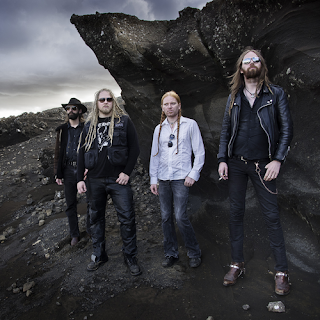 I'm gonna start this off with what might get me some hate but, I've never been a huge Sólstafir fan. I've never disliked them, but they've never been a band that I've paid too much attention to either. In all honesty, I actually do have all their full-lengths, but it's just been one of those bands I'll listen to once and kind of go onto other stuff.
So with this new album, and I know I'm a bit behind on this one, I've heard and read some mixed things, I've seen places that think it's really good while others just don't seem all that into it. Coming from someone who's never really been a fan, I think these guys are doing something interesting with this, as they've done on every other release. I've always respected these guys for doing something different on each album, starting out as more of a black metal band, an atmospheric one, but still a black metal band, since then they've moved into more of a post-metal-ish sort of group with tendencies that are closer to sludge and a bit of a blackgaze than their roots from black metal. With this album, it's hard to really call it black metal, there are a couple of moments where it goes into a more blackened sort of riff or drum pattern, but at this point it's largely removed from their sound. I will say that this is a brighter record than their last one was, 2009's "Köld." There are still plenty of darker spots on here, but it largely feels more vibrant than their last couple have.
Personally, I like the variety on here, for a post-metal-esque, call them what you will, act this album manages to be quite diverse. Sure, there are pretty standard sort of post-metally tracks on here in the vein of groups like Neurosis or Cult of Luna, Ljós í Stormi or Melrakkablús, then there are the more doomy sort of songs, Fjara, but there are also a handful of more up-tempo numbers that feel very vibrant and energetic, Þín Orð or Æra, and those are the songs that I was really impressed by. For myself though, I found that the tracks that I enjoyed the most and actually found more memorable were the ones that just sort of went along at a more mid-pace and just created a good, headbangable groove. Most of these track wound up being the longest tracks on the album, which I found beneficial, if a song is long, it should be interesting at the very least, and all of the longer tracks were interesting and more. Every song, no matter how fast or slow it is, still has dynamics though, there are shifts from one pace to the other so the whole thing doesn't end up feeling like bore after five or six minutes. Having said that, the album as a whole does end up feeling a bit too long for my own personal tastes, which is probably why they divided it onto two discs even though it could have technically been one.
I did enjoy this record quite a bit, still not sure if it's my favorite of the band's, but it does make me want to go back and listen to their older stuff again. It's not perfect, but a great majority of it is very well crafted and it gave me more than I thought it would. Check it out if you want to hear one of the more interesting post-metal-ish groups out there, or if you're just a fan that hasn't heard this one yet.
Overall Score: 8
Highlights: Þín Orð, Svartir Sandar, Djákninn
Posted by maskofgojira at 8:20 AM