Mournful Congregation - The Book of Kings (2011) 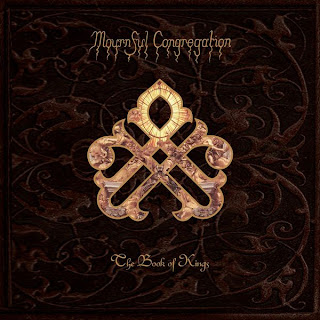 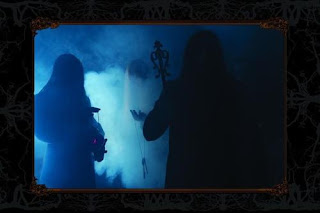 When I look at the reviews I did last year, I covered a lot more funeral doom than I did this year, not that it really matters, it's just an observation. But the reason I bring this up is that it seems like most of the better bands from the sub-genre are the ones that are more well known, and thus we have a new Mournful Congregation album. I've heard nothing but praises being sung for this album, and as a fan of the band, I've obviously been awaiting it for some time as well.
If there's anything to really be said about funeral doom, as a whole, it's that there really isn't a whole lot of middle ground in terms of band quality, or at least that's how I see it. There has always been a distinct line between the bands that were good and the bands that were bad, I can't really recall any times when I heard a funeral doom record and I was just meh on it. It's a genre that you really have to be good at to really build a fanbase, or you just have to be as underground and kvlt as possible to get the kids in their basements as your fans. To say that Mournful Congregation is one of the better bands would be an understatement. In terms of the whole funeral doom sub-genre, even the good bands can be nothing in comparison to others. A band like Mournful Congregation is definitely one of those bands that is in the top teir of their genre and has the respect of those who have actually explored the genre and can see why these guys are so good at what they do.
When you get a band that fuses emotion with crushing heaviness you get a band that sounds authentic and passionate about what they do, something that does not come across in music as often as it really should. With this album, you can tell that these blokes aren't in this band for money or fame, though to be honest playing funeral doom really wouldn't bring you that anyway, but you can just tell that they put every ounce of themselves into these songs. It isn't about just being as heavy and slow as possible like many may believe, as I did when I first began my journey into the sub-genre, it's about how you can convey the deeper sense of emotion within the droning riffs and chords. That, combined with a great sense of melody is one of the reasons why this band has made it to where they are today. The use of brooding melancholy and absolute sadness that purveys even the acoustic ballad, The Bitter Veils of Solemnity, retain the same weighty darkness that the other three tracks on here contain, without sacrificing any of it to go acoustic. But it takes the concluding, thirty-three minute title-track, The Book of Kings, to really show you what funeral doom can do at it's very best. It takes a lot to stretch a single song out for that length of time and keep it interesting, something not even prog-metal bands do all that often, I can't recall one putting out a single song that tops thirty minutes actually, and it certainly takes more than droning guitar riffs to keep this track interesting all the way through. Sure, there are a couple of moments where I feel a riff could have maybe been shortened, but for the great majority of the track, and I'm talking at least thirty minutes of it's whole, is interesting and well justified with doomy melodies, quiet interludes, chanted and spoken word vocals, and brooding atmospheres. This track is one of the epitomes of funeral doom, in general and of all time; if you have the patience for it, you'll hear one of the best funeral doom songs ever recorded.
If you want a reason why I haven't covered that much funeral doom this year, it's because very few albums come even close to touching the quality of this one. These guys keep raising the bar with each album and are quickly becoming a force to be reckoned with in all of doom. If you're in the mood and market for some fantastically slow doom, this is where you should go to first.
Overall Score: 9
Highlights: The Book of Kings
Posted by maskofgojira at 8:44 AM