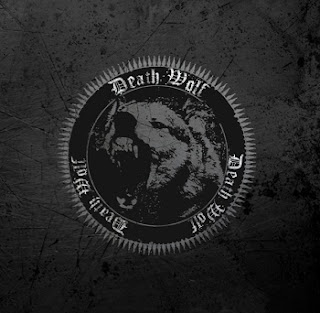 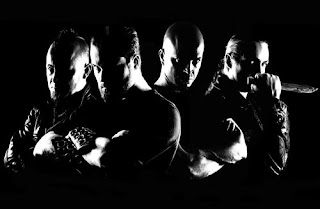 For some reason I love the idea of any sort of extreme metal being mixed with rock'n'roll, despite the fact that I'm not a fan of traditional rock'n'roll music. The idea of a black metal and rock'n'roll being mixed together just really got me excited, and will most likely on future occasions as well. It was only after listening to this a few times that I looked into the band and found out that this band had actually been called Devils Whorehouse for about ten years before changing their name.
What can you say about this sort of band, they play cool, they play hard, and they play passionately. Each of these songs on here really brings that old-school punk vibe to the band's black'n'roll core, that, along with a nice helping of traditional heavy metal riffs, turns this into one hell of a fun album to listen to. I've said this on about a couple of other albums this year, but this really isn't the type of band you should really analyze too much, stuff like this is pretty much just fun music that makes you want to mosh and headbang. These songs also don't tend to linger around all that long, with about half the tracks on the album not even reaching three minutes. I don't recommend someone listening to this if you're just going to try and look into every little thing about it because this isn't the type of record you try to pick apart, it's the type of record you have fun listening to.
Musically, I have to say that for all the fun I mention above, this is not just a fast and aggressive album, there's quite a bit of style shifting throughout. I think it could be expected by looking at track lengths, but shorter songs like Weaving Death or Sword and Flame are much more in the vein of blackened thrash while longer tracks like Morning Czar Shineth bring a more traditional sort of doom and heavy metal style, think Saint Vitus or mid-period Candlemass. I really respect these guys for taking the risk of being just as doomy on here as they are blasting or grinding, I think that it proves to be, in my opinion, a little stronger than their faster side. In addition to a pretty welcome diversity in styles, the vocals have a nice variety as well. There's a nice balance between more traditional black metal snarls, classic metal singing, and punkish shouts. You'll definitely hear a Danzig vibe to the vocals on here, seeing as the band originally started out as a Misfits' cover band it's not all that surprising, but it's nice and I enjoyed it, I also hear a bit of Wino in there as well, but not nearly to the same degree as Danzig.
Very enjoyable, I commend these men for writing a very solid album. You can't really come into expecting a whole lot of it because it's just a ripping album that hopefully people enjoy. I hope people take the time to check this out because it is rather enjoyable and is worth looking into if you have an interest in old-school metal mixed with a newer kind of approach.
Overall Score: 8
Highlights: The Other Hell, Wolfs Pallid Sister, Coming Forth By Night
Posted by maskofgojira at 8:51 AM