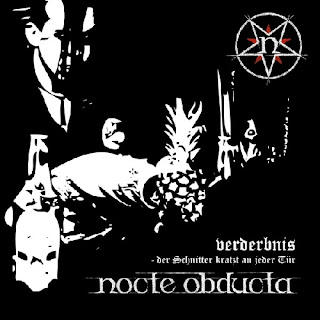 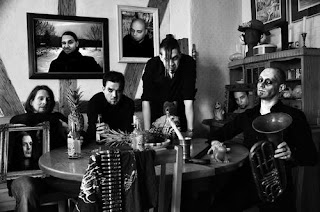 Let's just get this straight so I don't have people claiming otherwise, I'm a big fan of Nocte Obducta. They were one of the first black metal groups I found from Germany and remain to this day one of my favorites, if not my favorite. Very few bands come close to the sound they've developed through the years in my opinion.
The first thing to really say about this album is that is, once again, a shift from the band's previous material. In the albums prior to this one, the band moved more and more into progressive and experimental territory, accumulating onto 2008's "Sequenzen Einer Wanderung." The two songs that made up that album made use of elements ranging from pure blasting black metal to jazz fusion, folk rock, and ambient music, this new album is a couple steps back from that and returns, more or less, to the band's roots. Admittedly though, it is not as atmospheric as their first releases. This is also the first full-length album from the band that doesn't have a song that tops ten minutes, which might draw some people who aren't into longer songs. This is a much more direct and confrontational album than their last several, but it doesn't abandon it's more experimental and progressive tendencies. It contains a very punk kind of energy and youthful vibrancy that just gives all these songs that sort of pop that just makes them feel alive.
For myself, while it could still be called progressive, a lot of the tendencies on here might throw people off due to a couple of ideas that strike into the same vein of influences that are made use of in post-black metal/blackgaze bands. I hear influences coming from post-punk, industrial music, and post-rock being integrated into the band's sound, Niemals Gelebt being one example of it. I will say that their influence does not overpower any of the black metal and progressive sounds from the band, but they can certainly be found inside the album. Obsidian Zu Pechstein, which is the longest track on the album, is really the centerpiece of the entire disc, not surprisingly, and really is a nice mixing pool of all the different ideas present on the other songs. I was very impressed with the bass sound on the album, it was very warm and fuzzy sounding, and was very well placed in the mix as it can always be heard and delivers some great bass-lines throughout. I won't lie though and tell you that there weren't moments where you might think you were listening to a Rammstein album, most notably in the final track, Verderbnis, where the band really drops out and leaves the vocals alone for a very low sort of spoken word type of performance.
It's a good album from one of my favorite German groups that has yet to disappoint me. I've always liked this band and I hope more people check them out because they really deserve a lot more praise. Definitely look into it if you're a fan of experimental and progressive black metal.
Overall Score: 9
Highlights: Tiefrote Rune, Obsidian Zu Pechstein, Wenn Ihr Die Sterne Seht
Posted by maskofgojira at 10:34 AM