Nunfuckritual - In Bondage to The Serpent (2011) 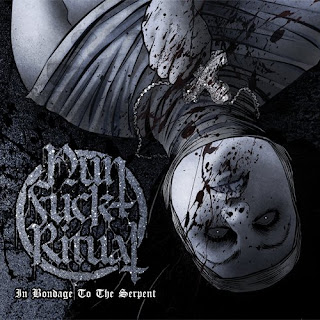 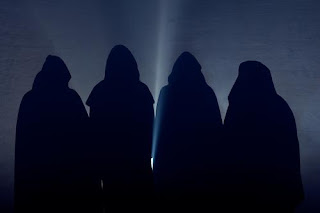 I, like many of the other people who saw this album were curious about what it was going to come out sounding like considering the people involved in it. Certainly, black metal was going to be the main sound, but beyond that I really don't know how strict it's going to keep that sound to it's chest. Supergroups are all the rage now, but I wasn't sure if this one was going to be a good one or bad, despite whatever you might have thought coming in.
Featuring members that include Dan Lilker of Brutal Truth, Espen Tørressen Hangård of Diskord, Teloch of Nidingr and The Konsortium, and Andreas Jonsson from The Black, like I said above, I didn't know how "black" this metal was going to be. Thus, to answer that question right off the bat, it you were searching for the record to fit alongside your early Darkthrone and Vlad Tepes albums, this is not where you want to look. This is the type of album that, while it's certainly a black metal album, is more than that, so put it alongside albums like the most recent Taake and Shining releases. It's got that kind of cleaner sound that still retains a lot of the darkness and grittiness of the black metal style, but the comparison made to those two bands comes in more ways than just the production. You will find that the personality shares a similar sense of distaste and disgust instead of hatred and chaos, or even sadness and depression. Also, the fact that Attila Csihar and Ravn both make a guest appearance on Komodo Dragon, Mother Queen should more than give them a solid boost of cred in the black metal scene.
Personally, it's those strange little sounds that are used in the background that perhaps makes the tracks I like stand out a bit more from the rest of the pack, so to speak. The organ that comes in a little more than half-way through Christotokos just brought in this almost psychedelic kind of vibe in while it was used. Plus the doomy nature of Parthenogen is far from being straight ahead blast-beats and tremolo riffing. This isn't really an album that relies on atmosphere as much as I think it kind of tries to to, and I hope that makes sense. What you get on here is an album whose production, at least to my ear, sounds pretty polished and clean sounding, it's not pristine or super slick, but it does sound like several more accessible releases from other bands who've released albums this year on bigger labels, but is trying to keep that more hazy and murky sort of sound. For myself, I don't think that the atmosphere manages to come through as effectively because the production is cleaner, it sort of pushes the ambiance into the background a lot more. I do believe that the title-track, In Bondage to The Serpent, does however, bridge the gap quite nicely though, really bringing the cleaner production and higher level of ambiance together in a very cool way.
I'm impressed with the record, for it's six songs do provide a good source of entertainment for it's entire running time. Like I said, the production does tend to kind of overwhelm some of the more ambient ideas on here, but I'd still say that as a whole, the album does work. Check it out if you're in the market for an interesting black metal album with a bunch of well skilled guys.
Overall Score: 7.5
Highlights: Christotokos, In Bondage to The Serpent
Posted by maskofgojira at 9:15 AM