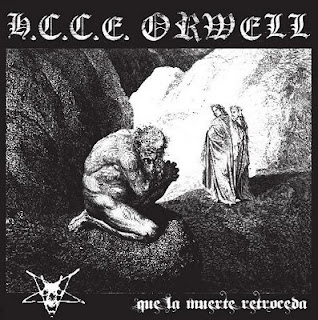 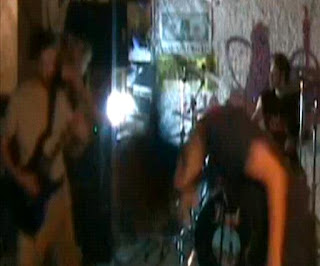 I've never heard of this band, not once before hearing this album, but, and this is different from the usual reason I check out an album, because of the band name I was interested. H.C.C.E. Orwell is an interesting name for a band so it was like, "I wanna hear what this is." Going in blind, but was it worth it?
Coming into this I wasn't sure, besides death metal, what this was going to sound like, I was pretty surprised by what I heard. This thing is raw, like really raw sounding. I could imagine this being recorded in the band's practice space, that's how raw this sounds. Very under produced and muddy sounding to be honest. I will give it to them that there are points on here that it will recall really early death metal records, which usually appeals to me, but even this is a bit too under produced for my own personal taste. I know there will be people who listen to this and will totally love it for how it sounds but in addition to how it was produced, the mixing, if any was actually done, which I doubt, is just abysmal. The vocals were obviously recorded after the instrumentation and are way too high in the mix, leaving the guitars, bass, and drums way behind them.
Musically however, this is a mix of old-school death metal with a bit of black metal thrown in as well. Keep in mind that when I say old-school in this case, it still retains a heavy thrash metal influence coming from the likes of Kreator and Destruction for example. You'll also find the traces of groups like Possessed, Sepultura, and Entombed bleeding through their sound as well. It's very primal and aggressive, you won't find any inclinations towards being forward thinking or melody in here. I will give it to them that there are several moments on here that recall that sound very well, Lobos for example, and the band pulls it off very well. Unfortunately, this feels way too sloppy and messy to do any justice to groups like that coming through their sound. Even the previously mentioned Lobos is almost ruined due to the sample of a howling wolf being used for way too long in the song, and it is IN the song as well as acting as it's outro. The same could be said of Piratas, where a random person shouting the song title just pops up near the end of the song for seemingly no reason whatsoever. The band is at their best when they're playing short, very uninterrupted primal death metal songs that sound totally unoriginal but decent.
Overall, this album is just one big headache to me, I didn't expect much, but I guess that's pretty much what I got. I figure there will be die-hard fans of death metal that'll check this out but it just isn't for me. If you look into this, be wary of it and don't go in expecting the world of it.
Overall Score: 5
Highlights: Lobos, Blasfemando Entre Serpientes, Si Yo No Ardo
Posted by maskofgojira at 7:58 AM