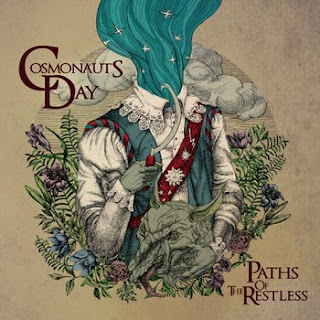 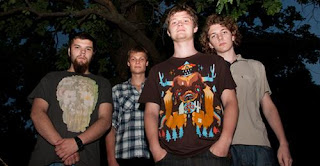 I don't talk about a whole lot of instrumental groups, it's more accidental than on purpose, but here's one. This Russian group is quite new, as this is the debut full-length, so I wasn't sure what kind of expectations to put on it coming in. Describing your music as being inspired by "inner and outer space" is quite a pretentious thing to say, in my mind anyway, so I was quite hopeful that they could live up to this.
First off, I have to say that for a band coming from Russia, this is pretty good, seeing as my musical relationship with that country has been more than a little weak in the past several years. Having said that, this is still just an instrumental post-metal group, so there wasn't a whole lot on here that you haven't heard elsewhere before. The Isis influence is all over here, along with a bit of Torche, Mastodon, and others that people who've listened to a lot more bands from those genres will be able to find in here. Obviously the comparison to groups like Pelican will and can be made, but I'd actually say that these guys are more active than what I've heard from Pelican. There's a definite Tool vibe going on in the guitar tone on here, with a lot of semi-psychedelic passages accompanying more typical post-rock bits.
In all honesty, I found the band playing their most memorable and melodic during shorter songs like Rift or Satellite. While, by comparison, the longer songs are fine, they just don't have the staying power that the shorter ones do. It's a little disappointing actually, because the longer songs just feel like another post-metal song, you have your heavy parts and your softer parts, but nothing really sticks. The Captain, in my opinion, was a let down because it was over nine minutes and just didn't do anything for me, though I did feel that The Great Disease actually progressed, it still didn't stick with me as much as some of the other songs. To me, I would have rather heard these guys playing short and catchy numbers that stuck out to me as being very melodic and accessible post-rock songs rather than play these longer and more adventurous post-metal songs, just because I feel like those aren't as well crafted, but I definitely see the path the band want to kind of go down. I'm sure it sounds weird for me to be advocating more simplistic and poppy songwriting over experimentalism, but that's just where I felt the band's strength is, though I do hope that their longer songs will develop into more memorable songs in the future as well.
Overall, it's a decent little post-metal album from a new band. They definitely have talent and I'm sure their sound will become more refined and unique in the future, but this album is just turned out a little more mixed from my point of view. Check it out if you're into more post-rock and post-metal groups, I think you'll actually enjoy this quite a bit.
Overall Score: 7
Highlights: The Art of Being Nothing, Rift, The Last Watchman
Posted by maskofgojira at 11:44 AM