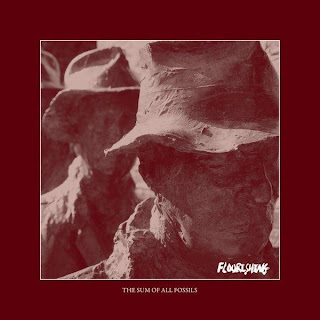 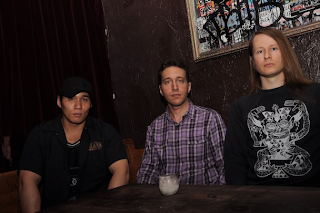 Yes, another record I'm only now covering, yes, I've fallen behind, I know. I've heard a lot of good things about this record, and I kind of let it just slip through my fingers. While I approach death metal, new death metal, very hesitantly, I was very interested in this album.
Within the recently dubbed "post-death metal" sub-genre popping up on my radar as of a couple months ago, I found a new interest in hearing bands that were doing something a bit different with death metal. As much as I do have a distaste for super-polished death metal, or really any form of extreme metal, note the use of extreme, and have more preference towards death metal bands that sound like old-school death metal bands, for the most part, there will always be those handful of groups that I just get tremendous amounts of enjoyment from because of how they've done something a bit different with the genre. When I listen to this album, and it was lumped in with groups like Portal, Ulcerate, and Mitochondrion, just to give you an idea of what I was told the sub-genre was to resemble, it does resemble a style that I do prefer. Personally, I've found that death metal that works more with atmosphere, whether it's directly through groups like Incantation, Immolation, or to an extent Morbid Angel, or in their own unique way, like Portal, it's just something I've found myself drawn to this year. When I listen to this album, I get a band that does a lot of the things I'm currently enjoying about modern death metal, or "post-death metal".
So, what do you get if you decide to listen to this album? As a death metal band, that's obviously the core, but there are a whole lot of different influences that I heard, the first three tracks brought to mind doom, progressive rock, and mathcore alone, and the rest of the album only expands on the primal death metal core. The atmosphere is like listening to the band play while surrounded by a haze of smoke, both from drugs and from fire itself. Hopefully that makes sense. Things are constantly shifting, from intense death metal phases of blast-beats to slow and sludgy chugs, In Vivid Monochrome. If someone told me they wanted to hear a a good "death metal" album, this probably wouldn't be the best album to give them because for all intensive purposes, this is way to varied and experimental to be simply "death metal". I should say that I applaud these guys for crafting a record that is not only intense throughout, and that's making use of plenty of dynamics throughout, it's not brutal 100% of the time on here, but also builds tension, Fossil Record probably being the best example of this. There are plenty of moments on here that do slow things down and become a bit more melodic and quieter, and those sections only enhance the more brutal parts, something I would think would be common knowledge at this point in death metal's history, but it seems like a lot of bands just don't get that concept, I'm glad these guys do.
I expected good things from this record coming in after reading and hearing good things about it, but it actually exceeded my expectations. This is a very good "death metal" album that I hope you do check out. Definitely look this group up if you want to hear some very forward thinking death metal.
Overall Score: 9
Highlights: The Prospects of Rejection, By Which We're Cemented, Fossil Record
Posted by maskofgojira at 9:51 AM