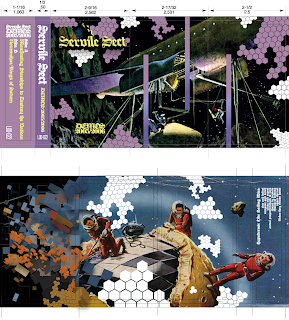 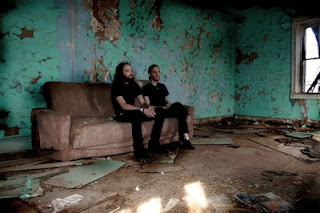 Who would have thought that 2011 would be the year when Servile Sect would come out of the obscurity of the underground into almost mainstream consciousness. With their previous two full-lengths that were released earlier this year, "Realms of The Queen" and "TRVTH," we got what has been some the duo's most acclaimed material. I'm not big on the idea of releasing demos, but when it came to Servile Sect, I was, and that's because I knew I'd be in for more than just rough ideas of songs from an album.
Depending on what you're a fan of from the SS duo will determine which side of this cassette you'll end up enjoying more of, though, if you're checking this out, chances are you're already a fan so you'll be more apt to already enjoy both sides. The first half of the cassette really exhibits a sound that could be described as a mix between psychedelic drone and piercing industrial noise. Now, if you end up hearing this, it's a lot more pleasant than it sounds written out. It's a very psychedelic track that does move around quite a bit. You'll find that while some sounds are maintained throughout most of the track, atmospheres will shift, different drones and noises will appear and disappear, and the overall appearance of the track will shift by the time it ends. It should also seem appropriate that the climax of the song comes a little more than half way through the track and then proceeds to be broken down again into darker soundscapes.
The second half of the cassette is a lot more "typical", if you can really say anything Servile Sect has released is typical in any sort of way to begin with. It's a much more aggressive and straightforward form of black metal that will probably be what will draw most people to this release. In comparison to even their first album, 2007's "Stratospheric Passenger," this is much more simplistic, riff wise, and you'll see an almost thrash element in some of the riffs as well, which is something that hasn't really been heard in any of their other material. Though, if you've heard any of the duo's material, you should know that they will never simply stay in one style. As the second half of this cassette progresses, the black metal element fades away into a similar realm of psychedelic drone and noise that was showcased on the first half. Unlike the first side of the tape however, this track does not maintain a drony/noise soundscape for what length remains after it begins, instead, it gives way to a more doomy sort of melody that is another element that I haven't really heard the duo explore all that often either.
Now, personally, I enjoyed this release; I find the duo's take on ambient and drone music is very interesting and unique in comparison with a lot of the other artists I've heard doing those styles. Be warned though, this is kind of completest material, don't dive headfirst into this expecting find the band sounding like this on every release that was released after this material was written. If you're a big fan of the duo, I highly recommend checking this out, but if you're new, definitely look into the full-lengths before going for this.
Overall Score: 8.5
Highlights: Side A
Posted by maskofgojira at 11:35 AM