Blasphemophagher - The III Command of The Absolute Chaos (2011) 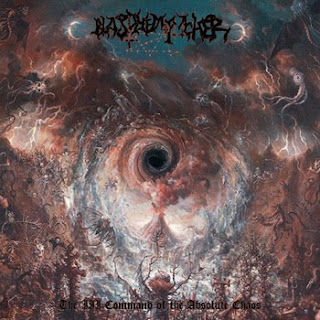 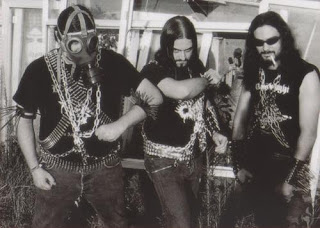 How in the world could I ignore an album cover like that! It's rare that an album cover looks as cool as this one does, where it literally looks like the end of the world. I have surprisingly encountered this band's work before, but this is the first time I have taken an interest in them.
I was surprised when I first found this album, and thusly looked up the band, because I didn't recall the name but apparently I had seen their last album a couple of times and just never listened to it. Like I said above, it was the cover that drew me in, but it was the music that made me stay. I've said on a couple other occasions that I'm not huge into the whole blackened death or the death metal/black metal fusion thing, I usually end up just skimming over stuff like that when I see it, but this thing was actually a lot better than I expected it to be. Having said that, if you come to this album expecting something totally different to the other bands you've heard, you will be disappointed. Maybe it was because I had low expectations that I enjoyed it more than I thought I would. It's also pretty short, being just over thirty minutes, so each of these ten songs just fly by.
Like I just said above, this is pretty much exactly what you'd expect you'd get with a genre like blackened death metal attached to it. Musically, it's fast, aggressive, and pretty brutal, to an extent. The guitars bring a nice blend of death metal chugging, black metal tremolo, and thrash metal speed, heard at their best on Entering The Expanding Plasma. The vocals are done in a pretty solid old-school roar and deranged growl, at times bringing to mind a bit of Autopsy in that regard. I particularly like how it sounds as though he's vomiting on the mic on Lords of Death Continuum, just a personal thing I like to hear every once in a while. Personally, I found the kick drum on here to be way too triggered and clicky for what the rest of the band sounded like. Besides that, I think each of the guys on here does an admirable job at writing some nice, nasty, trashy, blackened death metal songs. A lot of the songs are also arranged in pretty interesting ways as well, it's not just verse-chorus-verse, though I wish they'd repeat some riffs more often, I do think that when you hear a good riff, you do remember it. I do think that it has to be said however that some of the best songs on here are the longer songs, maybe it's just because the band decided to throw in more ideas or whatever, because the shorter ones are pretty good, but lack the catchy riffs presented in some of the longer ones, not that any song ever crosses the five minute mark by the way.
It's a pretty good blackened death metal album (I know blah, blah, blah genre names) that definitely was a lot better than I expected. I mean, for what it is, it isn't mindblowing, but if what you crave is something fast and aggressive from the death metal camp, I'd tell you to look into it. Black metal, death metal, and thrash fans could all definitely find something good in here.
Overall Score: 8
Highlights: Ritual of Disintegration, Entering The Expanding Plasma, Beyond Absolute Chaos
Posted by maskofgojira at 11:45 AM