Illogicist - The Unconsciousness of Living (2011) 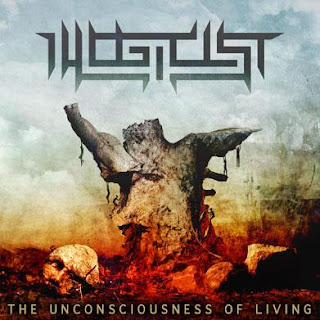 While it certainly hasn't taken them as long as a couple of other groups in the tech-death scene to release their third album, cough*Necrophagist*cough, this has still been a while coming. Back when I was big into the tech-death scene, Illogicist was one of my favorite bands, seriously. About three years, for me, of waiting, and this thing finally comes out, was it worth it?
I totally get the fact that bands that do play more technical styles of music need more time to write songs that they're satisfied with, but if it takes you more than a couple of years, you better put something good out, and that really applies to all styles of music. When I listen to this album, I hear a band that has really taken the time to try and craft something that's catchy, melodic, and technical, but don't really achieve all of them. I don't mean that to sound as negative as it probably does because when I hear these songs, they're a lot more fluid and tight sounding than on the band's previous albums, they're technical, no doubt, but are much more melodic and feature riffs that are simpler at times, and it works. There's just something missing in here that stops all the pieces from really connecting, and that's not even to say that it doesn't happen on occasion either. I found that when the band just went into more off-the-wall kind of sections, like in The Mind Reaper, I found it the most exciting and engaging parts of the album. Those weirder moments just hit like a ton of bricks and are exactly what I like from a band that's this technical.
Excluding that missing piece of the puzzle, I don't think this album is bad at all. Honestly, while I can't say that these guys are one of my favorite bands anymore, I still think that they do a tremendous job at crafting interesting songs and riffs, Perceptions From The Deceiving Memory for example. After the first three songs this album really picks up steam, not that every song has that missing piece of the puzzle that makes me really pumped when they occur, but after those opening trio of songs, the album just goes into a direction that I'm much more excited to hear. To a degree, most of these songs are actually more technical, at least they sound more technical anyway, and there's a lot of interesting riffs and fills. The drumming on a track like A Past Defeated Suffering just entranced me with the cool little cymbal fills that, whether they were planned or not, just caught me off guard in the best possible way. The bass playing in a song like Misery of A Profaned Soul that just stuck out, maybe to a higher degree than a couple of the other tracks on here, with great accents thrown in to double the guitar lines were just the icing on the cake.
Like I said, still a great band with a lot of interesting ideas and great performances. I'm not sure if I like this more than "The Insight Eye" as of right now, which is one of my personal favorite tech-death albums, but it's certainly up there. Definitely check this album out if you're into more techy death metal, definitely one of my favorite to come from this year from that scene.
Overall Score: 8.5
Highlights: The Mind Reaper, Misery of A Profaned Soul, A Never Ending Fall
Posted by maskofgojira at 12:19 PM