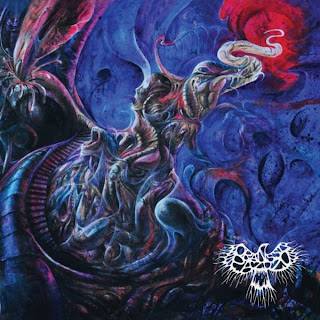 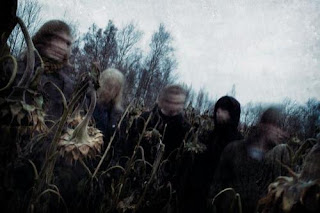 Two years ago when Oranssi Pazuzu released their debut album, it really threw people for a loop, in a good way. People were calling them the black metal version of Pink Floyd, everyone was really excited about that album the more time it was actually out. So after a couple of smaller releases, a track added to a compilation and a split with Candy Cane, we have their second full-length.
I'll go ahead and say that saying a band is the Pink Floyd of black metal is maybe putting a band on a pedestal that's a little to high, especially after only one album, and I'm guilty of this as well. Oranssi Pazuzu certainly have their 60s and 70s psychedelic, progressive, space, and krautrock influences mastered and I think when their debut first came out, it just blew people away because they hadn't really heard a band do that sort of fusion of genres yet, or done to that extreme yet I should really say. I'm read a couple of comments and reviews for this new one and while it appears that most are happy with it, people don't really see it as an improvement over the debut, as of yet anyway. So what is it about the album that makes people feel that way, other than personal preference? For me, the first album was a record of songs, this is an album that feels equally split between songs and jams, and that's something I think is turning some people off from it. Far be it from me to criticize other people's opinions, but I do feel that this is just one reason that this record isn't quite resonating with some.
To expand on my reasoning why I personally believe this album is more "jammy" than their other material is actually quite simple. If you listen to songs like Luhistuva Aikahäkki or Kaaos Hallitsee, it has that vibe where every member of the band is just sort of playing off each other and just really getting into it. The bass-lines and drumming underpin what everyone else is doing, whether it be really over-the-top or more low key, but it keeps the track grounded. To an extent, these tracks are a bit more "drony" and ambient than other tracks, but it can actually be looked at as an extension of their black metal side. The band's black metal side always had the intensity, but on these tracks the band seem to focus more on just creating an atmosphere through repetition and psychedelic textures. Which brings me to my next point, the overall sound of the record is a lot more hazy than before as well, another point that people may not enjoy. The entire record is covered in a thick miasma of synthe and guitar layers that make it feel like you're listening to the band play this stuff when they're all tripping out on psychedelics and were really into what they were jamming along to. Finally, I'd like to bring up the case that elements of post-punk and industrial music come into play on here as well, mainly in the performances of the rhythm section. The bass-lines are, in my opinion, more in front than ever before, which is used to full effect by utilizing it in the fashion I spoke of above. Call me a sucker for a good bass-line and groove.
Personally, I really enjoyed the record, and it's great to listen to while driving at night. I understand that it's not as accessible as the debut was, but in a sense I actually find it to be an even better record in the sense that it is more experimental and, for myself, memorable. Check it out if you'd love to hear black metal mixed with a whole bunch of psychedelics.
Overall Score: 8.5
Highlights: Komeetta, Andromeda, Kaaos Hallitsee
Posted by maskofgojira at 8:18 AM