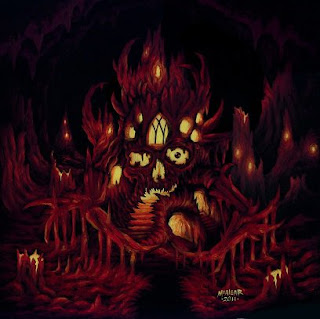 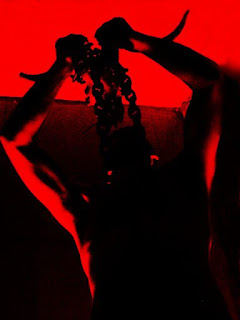 Time for another death metal album, and this is one that I've been hearing a little bit recently. I'll admit that it hasn't been all good things but I was open towards hearing this if only because it was getting mixed reviews. If it sounds old, give it to me and I'll give it a shot.
I think to say that Ritual Necromancy are going for a highly atmospheric death metal sound wouldn't do the band justice, these guys want to cover you in complete and utter filth when you're listening to the album. It's one of those albums that definitely has its influences written on its sleeves, but definitely tries to make something more of themselves than being just another death metal group. The likes of newer groups like Father Befouled and Portal, and to a lesser extent Encoffination, are definitely within the same general vicinity of sonic texture and density. I'd definitely say that these guys are rooted more in a pure death metal and at times black metal sound than some of their piers, but it still recalls the sounds of groups like Incantation and Immolation on more than one occasion.
Don't come into this expecting clean production, though why would you after reading the above statements, cause this thing will only disappoint you in that regard. This is one of those albums that isn't all that hard to get into if you're a fan of the atmospheric death metal groups that have been popping up as of late. A lot of what's on here is just soaked in atmosphere and reverb to the point that when a lead comes in, it just breathes an almost different sort of air into the track, hear The Chasm for instance. Most of these tracks still vary in tempo, ranging from your standard blasting sections to slower and doomy ones that I'm personally more favorable towards. From my perspective, the dense ambiance and raw guitars aren't an entirely perfect match for each other, some tracks on here, Penitence, wind up sounding like mud when they try to go for a more full-on death metal oriented riffing style. Luckily, for the better part of the album, the band focuses on more tremolo oriented riffing patterns that can be made out from under the haze that covers it.
It's a fairly decent album that's about what I expected from what I had read about it beforehand. These guys are obviously very talented and I think if they refine their songwriting and maybe focus a bit less on having a huge atmosphere, these guys could really prove to be something special. Check it out if you're into the new crop of atmospheric death metal bands.
Overall Score: 6.5
Highlights: Descent, The Chasm, Consummating Crypts of Eternity
Posted by maskofgojira at 9:11 AM