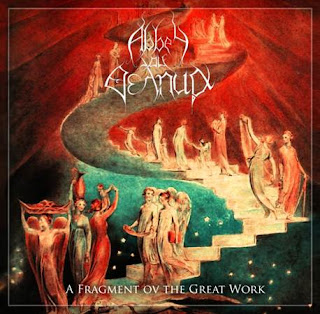 Post-black metal really gets a bad rap, mainly due to the bands that are being labeled as such that are more in vein of the blackgaze sound similar to Alcest. Back when the term originally meant something, it was used for bands that pushed the limits of black metal into new and interesting areas. Bands like this one and more progressive and avant-garde groups that did something, or attempted something, interesting.
After a rather typical orchestral intro to the album, which is pretty standard fare, this album really hits the ground running. The One Who Walks The Left-Hand Path demonstrates a total acceptance of avant-garde composition, mixing elements of symphonic black metal with more progressive rock tendencies, including a great guitar-organ main riff. Within this one track, you get a nice view of the kind of picture that this band likes to work with different ideas and sounds, which is the type of band I like to hear. Throughout the album the band works with the elements mentioned above as well as including sounds of electronic music, folk and pagan metal, classical music (without metal), and a bit of industrial as well. I do think that even when the band are more going for a more straightforward type of song, the shorter ones mainly, they accomplish an interesting dynamic between having very progressive riffs with blasting drums going pretty much full-on for the entire length of the song, The Hidden Wisdom & Clandestine Legacy Ov The Black Arts. The blending of more avant-garde and forward thinking elements and more straightforward and traditional ones creates a sound that is rooted in black metal tradition but definitely will turn off old-school purist but will turn the heads of people looking for something new and exciting from the genre.
Now, I will say that this album is still a debut full-length and it does have some of the typical trappings that debuts usually exhibit. Some of the ideas on here don't work for me and seem a bit too typical or unoriginal when you put it next to other songs on the album. Personally, I found the main melody used in Black Absinth Drunk While Analyzing The Writings Ov Nietzsche to be a bit uninspired and out of place, recalling really cheesy power metal and pagan metal bands. I'm also not a fan of some of the drum programming on here, it's not awful, but there are some parts where it just sounds too processed for my taste. Having said that, I do believe that as a whole, the album is composed and arranged very well and shows signs that the band's potential in these areas are only just being touched on here. I could definitely see future releases from this project leaning towards the excellence of groups like Solefald and Arcturus and maybe achieving such cult status as those groups. I have to be honest and say that I do hear bits of both groups in the band's sound already, but having those bands as influences only heightens my appreciation for this group.
It's a very exciting debut that definitely shows a lot of potential in this group. I can only hope that future releases have the band developing even further and maybe even becoming more experimental and adventurous. Definitely check this out if you're a fan of experimental and avant-garde black metal.
Overall Score: 8.5
Highlights: Unearthly Theophagia Ov A Nonexistent Deity, The Hidden Wisdom & Clandestine Legacy Ov The Black Arts, 9th April 1904 - The Day Ov Hadit
Posted by maskofgojira at 11:19 AM