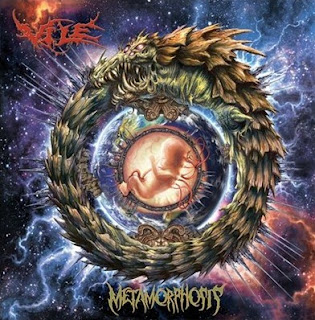 I'm not huge into brutal death metal, never have been, but there were a couple bands that helped to introduce me to the genre. Vile, among other groups like Skinless, Prostitute Disfigurement, and Defeated Sanity, were some of the bands that I actually enjoyed from the genre. As per regular release schedules, most bands from the genre tend to wait a bit longer in between albums, so it been a good six years since the last Vile album.
A noticeable shift has occurred somewhere within these six years in Vile's sound, and it's one that may throw some of their fans for a loop. No longer can the band's sound merely be classified as "brutal death metal" as you'll notice right away that what's on here is much more melodic and catchy than most of the band's prior material. The vocals have also shifted as well, Juan Urteaga's guttural growl has been replaced with Mike Hrubovcak more varied approach towards death metal vocals. You'll find a much wider array of styles from the higher pitched screams to a more guttural growl, but a different style mind you. These were all factors that kind of threw me off when I first listened to the album, but if you can get past these two factors, the album actually comes to be quite enjoyable.
I have to compliment the instrumentalists because even though they have focused more on melody for this album, it is no weak first attempt at it; this is an album that feels meticulously crafted and honed to a point. Tracks like Rise or I Am Alive bring melodies that are memorable but if you didn't know it was Vile, you'd think it was some completely different band. I don't think it'd be a stretch of the imagination to say that this album is much more uplifting, melodically, than one might have ever expected the band to sound. The use of elements like trip-hop-esque beats on Wolf At Your Door, the first track to be released before the album, and the acoustic guitars in Shadow Work also came as quite a surprise, but, once again, actually work. I think it's very impressive that a band that has come to be known for one type of sound to really come out of their comfort zone and pull of experimentation as well as these guys have is commendable. It isn't often that a group from the brutal death metal scene pulls off adventurous style shifts and gets away with it. I feel I should also mention that since I've said this is very melodic over and over again as well as mentioned all the different elements included, that I should also say that the band do not make use of clean vocals and remain in a more late 90's kind of melo-death sound.
I'm very impressed with the album as it exceeded any of the expectations I had for it coming in. I'm well aware that long-time fans might take a this as a bit of a shock, but it is quite good and certainly does not disappoint. Check this out if you want to hear a good mix of brutal and melodic death metal.
Overall Score: 8.5
Highlights: The Revealing, I Am Alive, As One
Posted by maskofgojira at 10:04 AM