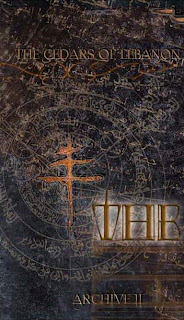 By the one fact that this is being release by Land of Decay, I was interested in this tape. It was actually surprising to me that the drummer of doom/sludge group Minsk is the head of this project. I knew coming in that this was going to be really different, but it was a completely different experience than I thought.
This six song tape can really take you places, if you let it. As six individual pieces, this is far from the doom/sludge metal of Minsk, instead, you have the heaviness and darkness translated into a much more ritualistic sense. It's perhaps darker, but not as accessible as a metal record would be. For myself, there were moments on here that were truly unsettling and did make me uncomfortable at times, Nerves in particular. There are moments on here where the soundscapes just become so intense, and that's not a joke or over exaggeration on my part, that it does creep me out. On more than one occasion, I seriously thought it was going to start raining while I was listening to this in my car. Call it paranoia, but this release is just that powerful and authentic.
Unlike what I've often heard as ritual ambient music, what occurs on this tape feels like an actual ritual. It's not just about the atmosphere, which obviously is a must, but it's what goes on with the instruments and in the background that brings these pieces to life. Sure, the percussion is very central to this project's style, but it isn't just a drum kit, Anthony Court esques that take for more abstract percussion. Hand percussion is used throughout, but electronic beats, or what appears to be electronic beats, along with more found sounds, like what appears to be wood being hit against metal on I Was There At The Moment of The Beginning. In addition to that, the vocals and voices that are used throughout provide a very necessary sense of almost spiritual eeriness to the songs. The field recordings also provide a much more authentic sense of realism and place to these recordings. Unlike a lot of other projects that I've heard termed as "ritual ambient", for this, the field recordings prove to be just as integral to the overall sound as any of the other instruments.
I won't claim that this is for everyone, because I doubt that a lot of people will be into this sort of stuff, but it is good. In my opinion, I do think a couple of minutes could have been shaved off here or there from various songs, but as a whole it's an interesting and introspective release. Check it out if you're into weird psychedelic drone or ambient music.
Overall Score: 8
Highlights: Place Me Underneath My Mother’s Breast Underneath The Cedar Tree, I Was There At The Moment of The Beginning
Posted by maskofgojira at 3:40 PM