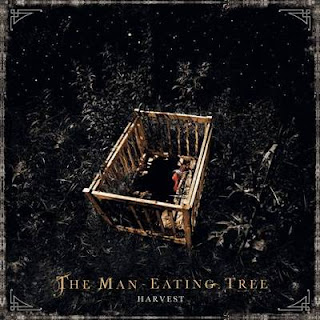 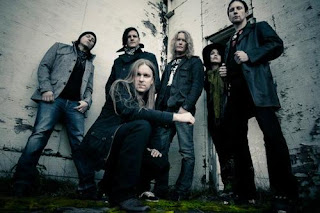 It's probably easy to judge by what I review that I'm not really all that big into the whole gothic metal thing. Whether or not because the whole thing has been moved from real gothic atmospheres and sorrow to female fronted power metal is irrelevant, but I've lost most of any admiration I once held for the genre. That being said, The Man-Eating Tree is a band that I have actually taken to since their debut last year.
My initial introduction to the band, and really the only reason I took interest in them to begin with to be honest, was through vocalist Tuomas Tuominen. I'm a big fan of his voice and had thought it was a shame that I wouldn't hear his work anymore after his former band, Fall of The Leafe, broke up back in 2007. His voice always struck me as very original and unique, striking me with the right balance between an almost folk-esque style while having a very interesting vibrato that just really captured my attention. His voice is the center stage on here and it's great to see him really get to a more comfortable place in the band's sound with this album.
I'll admit that I thought their debut, 2010's "Vine," was alright, not great, but I thought it was a decent start. I was hopeful that the band would find their sound and focus their songwriting a bit more in the future, and luckily, that's exactly what happened on here. Unlike what's been classified as gothic metal in recent memory, this band actually manages to capture that dreary and moody atmosphere that I could actually call gothic at points. The keyboards actually create that melancholic kind of soundscape with very lush textures as well as plenty of organ and piano. It's a lot more fitting with the "gothic" title because it actually allows the band to work with different moods and the sounds themselves are a lot more fitting than the symphonic orchestral synthes that tend to dominate most groups with that title. I think it's important to say that the band has definitely brought in a lot better riffs to this album, it is a bit heavier than the last one, though the dynamic between using heavier riffs and just moving into a groove or melody is well used. I was actually surprised by how heavy Down to The Color of The Eye actually managed to be because it made use of a couple of growls, which I never expected to hear from the band. The fact that this band isn't just a one-trick pony that has the soft verses and heavy chorus and bridge does wonders for them because we all know bands like that, and for them to know that that's not the formula they have to abide by, while still maintaining the ambiance around a song, just makes them a lot more interesting as songwriters and musicians, in my opinion anyway. I used the term gothic throughout this entire review, but with the state of what "gothic metal" is now, I think it's better that the band are known as atmospheric metal, by their own admission, as it is a lot more fitting.
I think it's a nice step-up from their debut and shows a lot more attention to their craft. I look forward to seeing these guys develop even further and creating songs that are even more memorable. Check it out if you're into really atmospheric and kind-of gothic metal, one of the better bands to be labeled with that tag.
Overall Score: 7.5
Highlights: Armed, Like Mute Companions, Incendere
Posted by maskofgojira at 11:57 AM