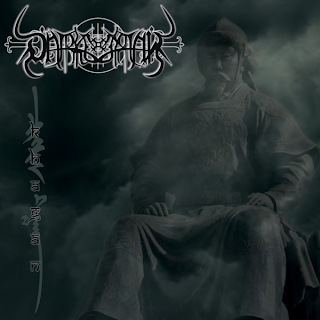 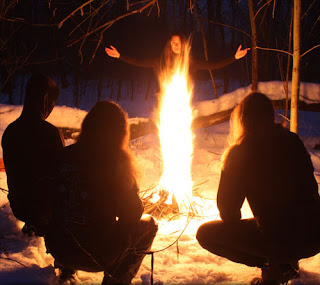 Here we go, the only group I could tell you that I know from Kyrgyzstan. Darkestrah are not only the only group I could tell you to come from Kyrgyzstan, now located in Germany, and I do mean this to be positive, they are probably the best. It's been three years since they released anything, but here we have short little EP dedicated to Genghis Khan.
I have to say first off that vocalist Kriegtalith is probably one of the most talented vocalists we have in the entire black metal scene at the moment. Not only can she perform the typical screams and raspy snarls, but her throat singing is part of what helped make this band so respected among those who've heard them. With this EP you don't so much get an evolution of the band's last couple albums but more a refinement. The three songs on here, one instrumental and two longer pieces, exhibit the band's own unique atmospheric black metal with a bit more of a symphonic element coming than usual. You will not find another band out there who sounds like this band, and whether or not that's just a product of where they're from or their influences or how they approach music, or all of those and more, they just sound like no one else. I will say that while this EP is definitely very good, it does not have some of their best material, and unfortunately does not reach the heights that 2008's "The Great Silk Road" had set for it, though with only three songs it was doubtful that it would top it. Still very good though, still better than most band's full-lengths.
It's still a very solid EP that is definitely worth checking out if you're a fan of the band already. I doubt this will blow you away if you're new because it is pretty much in a similar vein to their more recent material, but still very good. If you're a newbie, definitely go for their full-lengths before you check this one out.
Overall Score: 7
Highlights: Khagan
Posted by maskofgojira at 10:14 AM