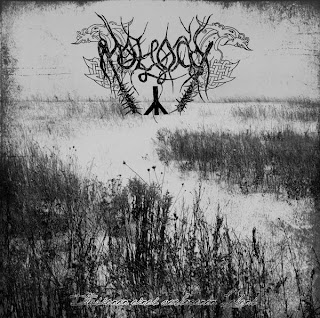 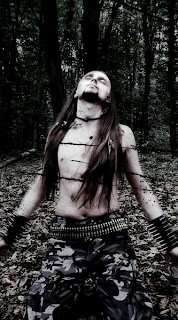 One more Moloch record for today. This one is a bit newer (I think) than the last one I covered, but does show a different side to Pr. Sergiy's style. Whether or not it's an improvement is really up to the listener, but my thoughts are, obviously, below.
Unlike the "Der Schein Des Schwärzesten Schnees" record which felt a lot like loose ends near it's conclusion, this album is a lot more of an album. I just feel that should be mentioned first and foremost about this release. While it is still about the same overall length, over an hour, the tracks a much more interesting and less redundant. In comparison to even the album mentioned above, you'll notice a bigger prevalence of the dark ambient side of his sound on here. I'd call the record closer to an atmospheric or ambient black metal sounding album if the vocals weren't still being winy. The guitars are still very lo-fi and fuzzy, retaining his trademark dissonant sound, and still crawl along without ever speeding up or making attempts to change a pattern, Dissonanz Tropfen Eines Gluhenden Schmerzes. I, personally, found the black metal tracks on here to be a bit less engaging than on the last album, but they fit the overall vibe of the album much better, containing the very cold nature of the entire disc in tact.
I mean, the album itself is still pretty down the middle in terms of style, half is more of the metal while the other half is more of the ambient stuff, but like I just said, it's much better than on the last album. About half the album's time however, is taken up the the album closer, Abgrund Meines Wesens, an entirely ambient piece. While the opener, Illusion Des Winters, expressed the idea of being entirely ambient as well, it was by no means as long as this song. This closer which tops twenty minutes is a long and droning piece of dark ambiance which definitely accomplishes what I think the intent was, to personify the cold and starkness of winter. You won't find any light whatsoever in the track as it just gracefully creates a floating atmospheric calm that will either envelop you or bore yo to tears. As the track progresses, you will find more and more tension building until the whole thing actually feels like it's about to fall apart before it finally calms down again. It's definitely not going to be for everyone. I will say that it creates fantastic background music. There are also two short "prelude" kind of tracks before this long epic that once again bring the idea of unfinished and incomplete ideas as they really don't go anywhere; I think if you took them off of the album, it would be stronger for it.
Is this a great album no, but is it an improvement over the last one, yes. This album definitely feels a lot better as an album and less like a compilation and is much more entertaining, in my opinion. If you like depressive-ish atmospheric black metal, check it out, or even if you're into dark ambient as well.
Overall Score: 7.5
Highlights: Illusion Des Winters, Ein Dusterer Winter Kommt II, Abgrund Meines Wesens
Posted by maskofgojira at 12:31 PM