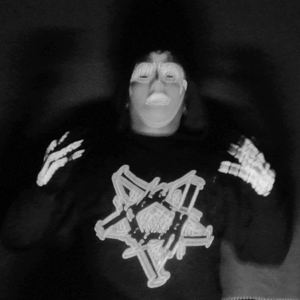 I think that the intro track of this album is kind of representative of what happens on the rest of the album. Introduction of LSD 25 is a two minute long sample describing what to do if a person changes into a monster; well, the rest of the album is that change. The harsh, echoing guitar lines that follow in the second track, Trip 1 - Beginning of The End, actually manages to capture, at least for me, the sound of someone tripping on LSD, a non-stop roller coaster of ups and downs but all going over 100 miles an hour.
I don't know how intentional the link between each track is meant to be, sure the overall concept does join them together with a theme, but each track doesn't link into the next, each trip being it's own sonic adventure, if you will. Tracks all follow the same theme of fast and slow movements during their length, as well as mechanical-like percussion, no vocals, and a raw, distorted sound. Each track has these things, and thanks to the shortness of each track, and the overall album, the entire thing is just over twenty minutes in total, each track can sort of take you on a similar, connected trip without getting boring or overly repetitive.
Overall, this is a pretty cool album, since there are no vocals, it might not feel as vibrant as some other bands, but I think this disc manages to accomplish what it's meant to do. I could see a person actually freaking out if they were listening to this and tripping on LSD at the same time. If you like experimental black metal, definitely check this one out.
Overall Score: 7
Highlights: Trip 1 - The Beginning of The End, Trip 4 - Decomposition of The Mind
Posted by maskofgojira at 8:23 AM