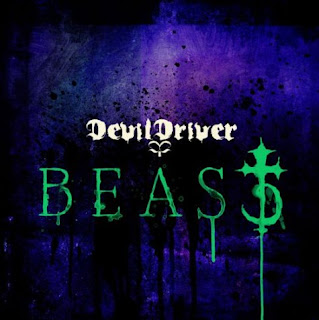 In all honesty, Devildriver's 2007 album, "The Last Kind Words," was my favorite record from the five-piece and while their follow-up to that album, 2009's "Pray For Villains," was decent enough, I didn't find it to be on the same level. This, the band's fifth album, follows down a similar path as their last, on a more melodic death metal sound, opposing their former groove oriented sound. While I might not agree with the band's choice to go down a more melodic path, I've heard that this album is the band's most aggressive yet, I was hopeful that was the case.
In all honesty, I found the first two tracks on here to be pretty disappointing when compared to the opening tracks on all of the band's previous albums were strong and extremely catchy numbers. Dead to Rights and Bring The Fight (to The Floor) were let downs with how unmemorable they were, in the case of the former, and how terrible the chorus to the latter was. The performances on both tracks weren't terrible, but the songs themselves are just way below standard for this band, in my opinion anyway.
Sonically, this album is a lot more aggressive than the last album, but retains the sense of melody from that album. I was surprised to find a bit of black metal on this album, hear tracks like Shitlist or Blur. There's also a much more atmospheric touch on here as well, which could be linked to the black metal thing, but tracks like You Make Me Sick have clean guitar parts that add a darker tone to these songs. The band also haven't abandon their groove metal sound either, with plenty of songs on here having some great riffs, and really the whole record has some great guitar playing anyway, hear the Meshuggah-like groove on The Blame Game or the progressive influenced sweeps that dominate Crowns of Creation.
Overall, this is a decent release, it's not my favorite Devildriver record, but it's not my least favorite. It has some decent songs, several that are forgettable, and a few that are just bad, I feel like the band has kind of lost some momentum with these last two releases. If you like the band, you'll probably already check this out, but otherwise if you're into more melodic groove metal, give this a shot.
Overall Score: 6.5
Highlights: Talons Out (Teeth Sharpened), Coldblooded, Crowns of Creation
Posted by maskofgojira at 10:19 AM