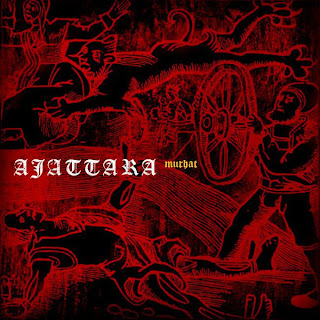 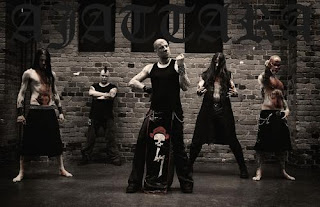 I can honestly say that it's been quite a while since I've listened to Ajattara, and not because of any reason in particular, I've just been listening to other things. From what I've heard, the band's last album, 2009's "Noitumaa," wasn't the best received by the fans or critics alike, though I actually enjoyed several tracks from it's unique prog/folk/rock sound. This new album has been talked about by fans as a return to form, as 2007's "Kalmanto" wasn't well received either from what I've read.
From the opening riffs of Kunnes Taivas Meidät Erottaa it should be clear that this is definitely not going to be like any of the previous albums released by the band. This album is much less atmospheric, experimental, or avant-garde than it's predecessors, but exchanges those qualities with a much more visceral attack of groovy black metal. It's a much more straightforward approach that perhaps doesn't show as much growth as I might have liked to have seen, or the type of growth I might have liked to have seen might be a better way to put it, but one that should still be able to please fans. That's not to say that there aren't some experimental things on here, I don't think anyone will deny that putting a barking dog on Ihmisen Luku isn't weird. When looking at the record as a whole however does reveal that this is a more death and doom sounding record more than it is experimental or even black metal.
For how straightforward this album is, I would have to say that it contains some of the band's most catchy, or melodic, tracks on it. I've heard the praises sung for tracks like Aura and Sokea Liha, both of which don't disappoint in how well they manage to stick in your head after listening to them. I also have to compliment the guitar tone on this album, it's nice a heavy sounding but doesn't have that usual black metal tone, adding to the death metal comparison. Rouja's (Pasi Koskinen) has also never sounded this brutal on an album from this band before, hear Murheiden Kilta, and it certainly reaffirms how great a vocalist he actually is.
Overall, I'd call this a solid album with some really killer songs on it. While this isn't my favorite album from the band, it's not my least favorite, and it certainly is a nice change of pace for them. If you like the band or you want something a little more out-there for your death metal, check this one out.
Overall Score: 8.5
Highlights: H.A.I., Aura, Apilas
Posted by maskofgojira at 6:06 AM